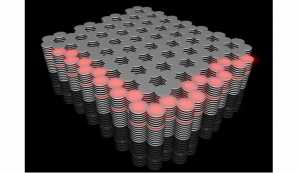 An international research team has built a topological insulator that can operate with light and electronic excitations simultaneously. Existing topological insulators are based on either electrons or photons, allowing only one of these applications to be implemented. In contrast, the new system, developed by physicists at Julius-Maximilians-Universität Würzburg (JMU), with colleagues from the Technion-Israel Institute of Technology and Nanyang Technological University, can be used for both switched electronic systems and laser applications.

Called an exciton-polariton topological insulator, the new system was built on a microchip using primarily gallium arsenide (GaAs) semiconductor compound. The system is organized as honeycomb lattices that are made up of many small pillars, each 2 μm in diameter. The honeycomb structure is under the influence of a magnetic field.

When this microstructure is excited with laser light, light-matter particles form inside the structure, at the edges exclusively. The particles travel along the edges and around the corners of the structure with relatively low loss. When the magnetic field is applied, it enables the researchers to control and reverse the propagation direction of the particles, leading to the unidirectional flow of a polariton wave packet around the edge of the array. This chiral edge mode is populated by a polariton condensation mechanism.

The researchers used scanning imaging techniques in real space and Fourier space to measure photoluminescence and visualize the mode as it propagated. They demonstrated that the topological edge mode goes around defects, and that its propagation direction can be reversed by inverting the applied magnetic field.

The exciton-polariton topological insulator shows promise both as a fundamental discovery and as a means to new applications in optoelectronics. Pure light particles are difficult to control; they have no electric charge and therefore cannot be readily controlled with electric or magnetic fields. The new topological insulator, in contrast, is capable of controlling the direction of light.