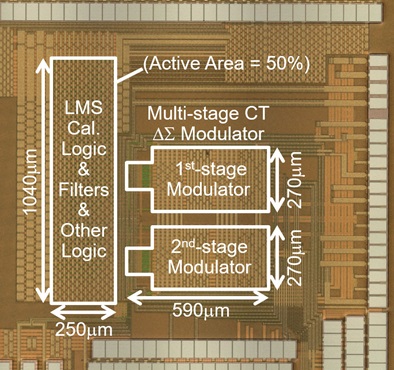 Designed to boost the performance of ΔΣ A/D converters for stable performance under the harsh conditions required for automotive semiconductor devices, the new technology comprises (1) enhanced precision by using a least mean square (LMS) algorithm to measure and calibrate the transfer function of a continuous-time ΔΣ modulator, and (2) the world’s first multi-rate LMS search algorithm, which lowers the order and operating frequency of the coefficient search circuit and FIR digital filter to reduce power consumption. The 28 nm process was used to implement a multi-stage ΔΣ A/D converter employing sequential integrators operating at high speed.

By reducing the digital calibration circuit operating frequency to 120MHz, low-power operation is also achieved, with 37mW power consumption (analog:19mW, digital:18mW). In addition, the new technology has been confirmed to provide stable performance over a wide temperature range, proving that it is highly robust and capable of stable operation under punishing conditions.

The results of this joint effort with Hitachi were presented by Renesas on February 18 at the International Solid-State Circuits Conference (ISSCC) 2020.
In recent years, as advanced driver assistance systems (ADAS) and self-driving vehicles come closer to becoming a reality, there has been an increasing need for automobiles to incorporate a variety of sensors, such as millimeter wave radar, LiDAR, and ultrasonic wave sensors, in order to detect objects and people, and to provide an awareness of the vehicle’s surroundings.

A/D converters used to convert analog signals from such sensors into digital signals must operate at a high speed and with high precision. However, the harsh conditions specific to automotive vehicles have made obtaining stable performance an important issue. In response, Renesas and Hitachi developed the new continuous-time digital calibration technology to make high-speed, high-precision ΔΣ A/D converters capable of withstanding punishing conditions a reality. The new A/D converter circuit technology developed jointly by Renesas and Hitachi is described below.

Technology using LMS algorithm to measure and calibrate the transfer function of a continuous time modulator
Generally, RC integrators that do not require input sampling capacitor and are suitable for high bandwidth are employed as a method of increasing the conversion speed of the ΔΣ A/D converter. These integrators are connected in cascade for a high-order loop filter. However, when the input is excessively large, precision is lost due to the ΔΣ modulators’ oscillation.

The coefficients searched by the LMS algorithm are input to FIR digital filters, and the second-stage modulator result is used to completely cancel the quantization error of the first-stage modulator, making it possible to obtain high-precision A/D conversion results. This new technology enables calibration within the digital circuits operating in the background even if the characteristics of the analog integrators are affected by environmental variations such as temperature changes. As a result, Renesas and Hitachi succeeded in achieving both high precision and robustness in a highly stable multi-stage ΔΣ modulator, something previously considered difficult if not impossible.

World’s first multi-rate LMS search algorithm that enables smaller circuit scale and low power consumption. When searching ΔΣ modulator transfer functions using the LMS-based coefficient search algorithm described above, the number of tap coefficients required by the FIR digital filter was very large (more than 100) when the gain-bandwidth product of the integrator amplifier circuit was insufficient, which meant that the scale of the logic circuits would be impracticably large. However, it was found that extracting only the transfer function characteristics near the signal bandwidth was sufficient for transfer function calibration.

By reducing unnecessary frequency information by means of a post-conditioner, it became possible to substantially reduce the number of tap coefficients, even when the gain-bandwidth product of the amplifier circuit was small. In addition, by using shift registers to store reference signal data, Renesas and Hitachi developed a new calibration circuit using an LMS algorithm that was not affected by sub-sampling. This made it possible to reduce the operating frequencies of the coefficient search and FIR filter to one-fourth what they previously were. The world’s first digital calibration circuit technology successfully reduced the circuit scale while also reducing power consumption.

Renesas will continue to develop practical applications for this technology to enable high-speed, high-precision, and highly reliable A/D conversion of automotive sensor signals in order to accelerate the widespread adoption of self-driving technology and the realization of a safer and more secure driving experience.