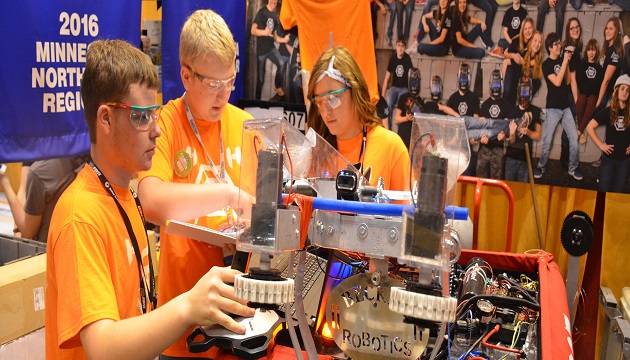 Mouser Electronics, Inc., the New Product Introduction leader empowering innovation, is pleased to announce that it will once again be a major sponsor of the FIRST Championship. Mouser will sponsor the Hall of Fame Exhibit at the title matches, honoring the winning teams with the esteemed Chairman’s Award. Joining Mouser in this sponsorship at the robotics competition are valued manufacturer partners Nordic Semiconductor and ON Semiconductor.

The 2017 FIRST Championship will be held in two locations: April 19–22 in Houston at the George R. Brown Convention Center, followed by the second weekend, April 26–29, in St. Louis at the America’s Center Convention Complex.

Mouser is a strong supporter of the FIRST (For Inspiration and Recognition of Science and Technology) Robotics Competition, an international high school robotics building contest that began in 1992. This year’s creative FIRST STEAMWORKS theme promises to inspire and challenge students and entertain audiences of all ages with its take on the steampunk subculture.

The mission of FIRST is to inspire young people to be leaders in science and technology through exciting mentor-based programs that build science, engineering and technology skills. FIRST programs inspire innovation and foster well-rounded life capabilities including self-confidence, communication, and leadership.

“Science education is at the heart of who we are at Mouser, we are proud to continue sponsoring a program that supports the brightest young minds and future engineers,” said Kevin Hess, Mouser’s Senior Vice President of Marketing. “The FIRST Robotics Competition provides students with a platform for innovation, a chance to solve real engineering challenges, and an opportunity to build character and self-esteem.”

The FIRST Robotics Competition Hall of Fame exhibit at the FIRST Championship highlights the past recipients of the Chairman’s Award, the highest honor awarded in the FIRST Robotics Competitions. Instead of awarding the Chairman’s Award to the team that earns the most points in the competition, FIRST honors the team that best exemplifies the goals and values of FIRST.

Since 2012, Mouser has supported FIRST Robotics Competition at the local, regional, and international levels, including donating electronic components to FIRST teams. The program challenges high school students to build 120-pound robots that complete a different task each year using a standard set of parts, plus any additional off-the-shelf or custom parts. Each team receives a kit of parts, including motors, batteries, a control system, a PC, and a mix of automation components — with no instructions. Teams have six weeks to transform their kits into working robots designed to perform specific task

To learn more about how Mouser supports FIRST, visit http://www.mouser.com/first/.

MathWorks Announces R2017a of the MATLAB and Simulink Product Families