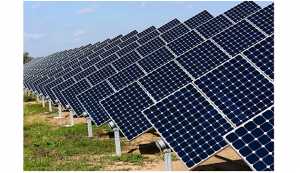 The ministry of new and renewable energy (MNRE) has asked lending institutions to give preference to Indian standards to ensure quality while financing solar power projects, having noted that the current procedure favours Chinese suppliers at the cost of Indian players.

In a recent communication to the finance ministry, MNRE said lenders should prefer manufacturers complying with standards laid down by the Bureau of Indian Standards (BIS) while financing solar projects, instead of following the Bloomberg Tier-I list, which mostly includes foreign players, or large Indian manufacturers such as Tatas and Adani Solar.

“Even Chinese companies can have BIS certification. We are saying, don’t give preferential treatment to Chinese by following Bloomberg Tier-I list, which mostly has foreign players and only a couple of Indian players,” an official said.

Last year, MNRE made it mandatory for manufacturers or sellers of PV modules in India to obtain BIS registration. Following several extensions, the order will be effective January 1, 2019, the official quoted above said. Prior to implementation of BIS certification as a compulsory requirement, there was no uniform means to ascertain quality of modules supplied in India, the ministry noted.

Such a condition automatically leads to a preference being given to foreign, including Chinese, manufacturers at the cost of Indian ones, the letter added.

Industry experts say that while tier-I certification looks at bankability of solar projects, the BIS certification focuses on the compliance to norms related to raw material used in developing solar modules.

“It would be an ideal combination for a manufacturer to possess both certifications as they add credibility and help build the market in India and globally, as well as boost stakeholder confidence. To assure attractive returns for our investors, it is advisable to consider both certifications in tandem,” said Sunil Rathi, director at Waaree Energies, which has also been recognised with tier-I certification.

“The tier-I list is a more holistic approach; more suited to lenders as a guidance to tell them what has been acceptable to different lenders in the past. MNRE is insisting on use of BIS standards, which is more like technical specification. For lenders, that alone is not sufficient,” said Vinay Rustagi, managing director at renewable energy consultancy Bridge to India.

First tender for 1,000-mw solar capacity to be issued in DSIR...

Danfoss Joins UN for Sustainable Energy for All Initiative in India