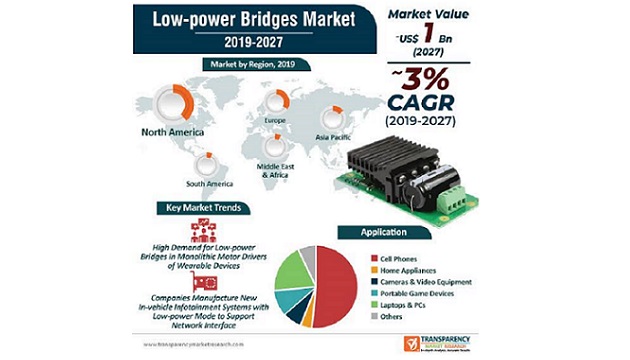 Low-power operation of bridge circuits is becoming increasingly common. Several bridge-based transducers are low-impedance devices, which complicates the low-power design. The most obvious method to minimize bridge power consumption is to restrict drive to the bridge. Currently, UART, SPI, and I2C are the common hardware interfaces that people use for the development of microcontrollers. The IrDA interface makes wireless connectivity possible, so that the system can communicate with PDAs, consumer remote controls, and other wireless devices. The UART also features automatic hardware and software control, so that data flow can be regulated to prevent data overflow or loss of data.

Surging demand for low-power bridges for use in various devices and various benefits offered by the same are some of the fundamental factors boosting the growth of the global low-power bridges market. Low-power bridges are extensively used in smartphones, tablets, and other mobile devices. Bridge ICs (I2C/SPI to UART/IrDA/GPIO) offer compact, low-power protocol converters for creating simpler and more flexible designs, while reducing the software overhead and time to market. These bridge solutions help designers easily combine multiple devices, incorporate new features, and seamlessly interface common communications protocols. Increase in the sales of smartphones and mobile devices is likely to drive the global market for low-power bridges during the forecast period. The sales of smartphones have been increasing at a rapid pace in developing countries such as India, Indonesia, Malaysia, and Brazil. I2C and SPI are the two widely used bus protocols in present-day embedded systems. The I2C bus has a minimum requirement for pin count, and hence, a smaller footprint on board. The SPI bus provides a synchronized serial link with performance within MHz range.

However, decline in the demand for consumer electronic devices is a key factor projected to hamper the growth of the global low-power bridges market during the forecast period.

The low-power bridges market in Asia Pacific is estimated to expand significantly during the forecast period, owing to the presence of a large number of prominent players in the region, and continuous technological advancements. The low-power bridges market in the Middle East & Africa is expected to expand at a moderate pace in the near future, due to considerable investments in the power sector in these regions.

In February 2019, Nexperia is planning to introduce new products with low-power bridge technology in the market, and increase its annual manufacturing capacity to more than 100 billion parts.