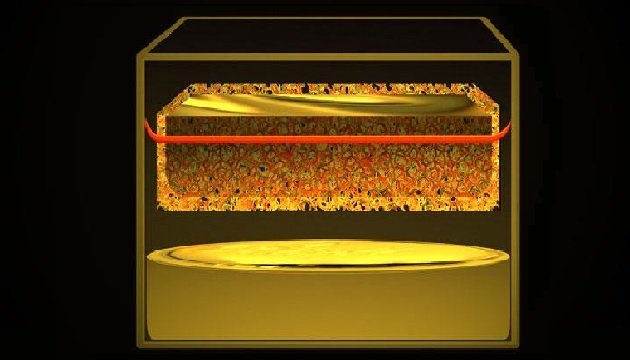 Li-ion is now the dominant stationary energy storage battery for electric utilities. However, an innovative molten-electrode battery produced by MIT researchers may be in line to replace it.

With renewable energy sources, we can’t control when the sun shines or when the wind blows, making it hard to operate the electrical grid when wind and solar resources are absent. To maintain our supply of electricity we need a system that meets the highest levels of demand. And to meet the continuous demand for electricity requires some method for storing energy when renewable energy or conventional forms of energy are lost. There are two major competitors for the stationary energy storage by utilities: Li-ion and several electrochemical batteries.

Over the past two years, according to Navigant Research, lithium ion (Li-ion) batteries have emerged as the most widely deployed technology for new stationary energy storage projects. One reason for this is that Li-ion battery pack costs have decreased dramatically, triggered by increases in manufacturing capacity and sales volumes for the EV industry. Typically, these batteries are selected due to their combination of low cost and reputable vendors. As Navigant Research notes,“Despite their popularity, Li-ion batteries are not well-suited for certain stationary storage applications.”

Non-Li-ion battery technology providers are hoping to capitalize on the weaknesses of Li-ion technology and capture a piece of this rapidly growing industry. For example, researchers at MIT have developed a new molten-electrode energy storage battery. This battery is based on electrodes made of liquid metals and is fitted with a new type of metal mesh membrane that could be used for grid-scale installations. The liquid metal contained in the mesh can be sodium, but it doesn’t have to be. The liquid metal on the bottom of the cell can be lead, tin, or zinc, among other options. This is a major departure from the sodium-nickel chloride battery which relied on solid nickel and solid nickel chloride. The molten salt is composed of chlorides of the metals in the electrodes.

These MIT researchers are led by Professor Donald Sadoway, the John F. Elliott Professor of Materials Chemistry; postdocs Huayi Yin and Brice Chung; and four others. Although the basic battery chemistry the team used, based on a liquid sodium electrode material, was first described in 1968, the concept never caught on as a practical approach because of one significant drawback: It required the use of a thin membrane to separate its molten components, and the only known material with the needed properties for that membrane was a brittle and fragile ceramic. These paper-thin membranes made the batteries too easily damaged in real-world operating conditions, so apart from a few specialized industrial applications, the system has never been widely implemented.

But Sadoway and his team took a different approach, realizing that the functions of that membrane could instead be performed by a specially coated metal mesh, a much stronger and more flexible material that could stand up to the rigors of use in industrial-scale storage systems. “I consider this a breakthrough,” Sadoway says, because for the first time in five decades, this type of battery—whose advantages include cheap, abundant raw materials, very safe operational characteristics, and an ability to go through many charge-discharge cycles without degradation—could finally become practical.

While some companies have continued to make liquid-sodium batteries for specialized uses, “the cost was kept high because of the fragility of the ceramic membranes,” says Sadoway. “Nobody’s really been able to make that process work.” This includes GE, which spent nearly 10 years working on the technology before abandoning the project.

As Sadoway and his team explored various options for the different components in a molten-metal-based battery, they were surprised by the results of one of their tests using lead compounds. “We opened the cell and found droplets” inside the test chamber, he says, which “would have to have been droplets of molten lead.” But instead of acting as a membrane, as expected, the compound material “was acting as an electrode,” actively taking part in the battery’s electrochemical reaction (Fig. 1).

“That really opened our eyes to a completely different technology,” Sadoway recounts. The membrane had performed its role — selectively allowing certain molecules to pass through while blocking others — in an entirely different way, using its electrical properties rather than the typical mechanical sorting based on the sizes of pores in the material.

In the end, after experimenting with various compounds, the team found that an ordinary steel mesh coated with a solution of titanium nitride could perform all the functions of the previously used ceramic membranes, but without the brittleness and fragility. The results could make possible a whole family of inexpensive and durable materials practical for large-scale rechargeable batteries.

The use of the new type of membrane can be applied to a wide variety of molten-electrode battery chemistries, Sadoway says, and opens up new avenues for battery design. “The fact that you can build a sodium-sulfur type of battery, or a sodium/nickel-chloride type of battery, without resorting to the use of fragile, brittle ceramic—that changes everything,” he explains.

The work could lead to inexpensive batteries large enough to make intermittent, renewable power sources practical for grid-scale storage, and the same underlying technology could have other applications as well, such as for some kinds of metal production, Sadoway says.

Sadoway cautions that such batteries would not be suitable for some major uses, such as cars or phones. Their strong point is in large, fixed installations where cost is paramount, but size and weight are not, such as utility-scale load leveling. In those applications, inexpensive battery technology could potentially enable a much greater percentage of intermittent renewable energy sources to take the place of baseload, always-available power sources, which are now dominated by fossil fuels.

Dr. Donald Sadoway and his colleagues from MIT have spent many years with liquid metal battery research. The research on campus has been supported by the Department of Energy’s ARPA-E program, the French energy company Total, the Deshpande Center, and the Chesonis Family Foundation. Bradwell played an instrumental role in advancing the technology while he completed an M. Eng degree, a Ph.D. degree, and a one-year postdoctoral fellowship.

Prior to the current battery development, Sadoway and David Bradwell co-founded a new company, Ambri, with the goal of commercializing the flow battery technology they developed in 2010. Bradwell is now senior vice president of commercialization and chief technology officer of the firm.

Ambri’s battery has all three active components that are liquid when the battery operates, enabling long lifespan and comparatively low-cost manufacturing. Ambri’s cells are made of three simple components—a salt (electrolyte) which separates two distinct metal layers (electrodes). Cells operate at elevated temperature and, upon melting, these three layers self-segregate and float on top one another due to their different densities and levels of immiscibility.

This all-liquid cell design avoids the main failure mechanisms experienced by solid components in other battery technologies—enabling systems to have a projected lifespan of over 15 years with no degradation in performance. To better understand the long lifespan and performance of the cells, Ambri has performed extensive laboratory testing on over 2,500 cells with a cumulative test time of 600,000 hours and 100,000 cycles.

When a liquid metal battery cell is at operating temperature, there is potential energy between the top metal layer and the bottom metal layer which creates a cell voltage. To discharge the battery, the cell voltage drives electrons from its Magnesium (Mg) electrode, delivering power to the external load, and the electrons return back into the Antimony (Sb) electrode. Internally, this causes Mg ions to pass through the salt and alloy with Sb, forming a Mg-Sb alloy. To recharge, power from an external source pushes electrons in the opposite direction, pulling Mg from the Mg-Sb alloy and re-depositing Mg back onto the top layer, returning the system to three distinct liquid layers.

The base unit for Ambri’s system is a fully-sealed liquid metal battery cell (Fig. 2). The company’s cells are strung together within a thermal enclosure to form an Ambri Core. This is insulated and “self-heating” when operated every couple of days, requiring no external heating to keep the batteries at operating temperature. The Ambri System comprises multiple Ambri Cores that are strung together and connected to the grid with power electronics. The configuration of the Ambri System is modular and can be customized to meet specific customer needs.

ViZn Energy is another company that produces a flow battery. Its core technology, chemistry, and robust packaging is the result of more than eight years of engineering and R&D into the energy storage technology. It has the ability to simultaneously deliver high-power and long-duration energy services. The ViZn battery (Fig. 3) achieves this unique performance blend by utilizing a hybrid flow battery in which alkaline electrochemical components are dissolved in the electrolyte.

This flow battery is a type of rechargeable battery where the battery stacks circulate two chemical components dissolved in liquid electrolytes contained within the system. The two electrolytes are separated by a membrane within the stack and ion exchange across this membrane creates the flow of electric current while both liquids circulate in their own respective space. The maximum power, in kilowatts, of any flow battery is determined by the number of stacks in the power unit as voltage is built up with more stacks. The amount of energy any flow battery, in kilowatt hours, can deliver is determined by the volume of the tanks. Larger tanks lead to longer duration.

ViZn batteries run on a safe chemistry that is non-toxic, non-flammable, and non-explosive. The electrolytes used in the ViZn system are food grade and found in abundance at commodity prices.

Energy storage is the enabling technology for the modern electric grid. These systems can tolerate extreme high-temperature environments and deliver under intense duty cycling across the full state of charge.