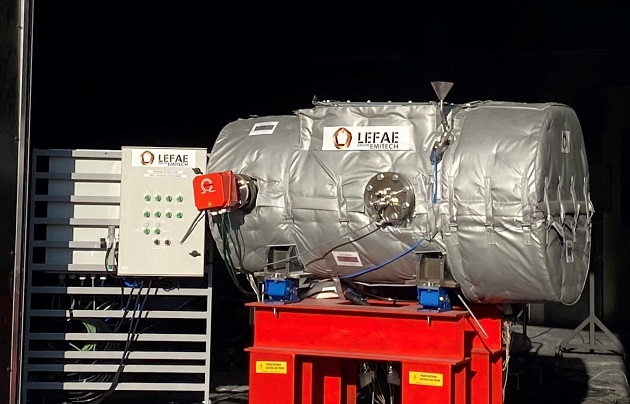 Lefae is the Emitech Group’s laboratory specializing in environmental testing with severe constraints: fire testing and combined climatic testing. Based in France near Lyon, it has just qualified a new testing facility for verifying the conformity of equipment installed in potentially explosive zones (equivalent to ATEX requirements) in the presence of hydrocarbon fluids and vapours. Conditions of explosivity are often found in the aeronautics and military industry, but also in the automotive and marine industries.

Lefae’s new bench is designed for carrying out tests in an explosive atmosphere. These tests specify the requirements and procedures for aircraft equipment which could come into contact with flammable fluids and vapours. This equipment is generally associated with fuelling systems, such as tanks, pump units, valves, monitoring and control instruments, etc. This type of test encompasses both normal and fault conditions potentially occurring in zones that are or may be in contact with flammable fluids and vapours during flight operations.

The conditions for explosivity are obtained by producing a stoichiometric air/fuel mixture in sufficient proportions to exceed the Lower Explosivity Limit (L.E.L.) of this mixture. The nature of the components of this mixture must be taken into account as well as the conditions of temperature and pressure under which the mixture is created. Flammable test fluids, vapours or gases simulate those normally used in conventional aircraft and which require oxygen for combustion.

Testing in a real environment

The tests performed by Lefae comply with the requirements of EUROCAT-ED-14D, RTCA DO-160, MIL- STD-810 standards. They enable functional tests to be run on the equipment in an explosive atmosphere without triggering the explosion of the stoichiometric air/fuel mixture. They evaluate the capacity of the protective enclosure (ATEX requirement approach) of the equipment under test to contain an explosion or a flame when the equipment is activated. The characterization of the containment is then carried out by
introducing the explosive mixture and then triggering it. The test also reveal overheating of the circuits or components in hydraulic or exhaust systems for example, and intermittent or permanent hotspots capable of triggering the explosion of the mixture.

Lefae carries out tests in a real environment and all climatic, mechanical, hydraulic or electrical conditions. The test bench has been designed to the following specifications: the chamber volume is 450 dm3, absolute pressure conditions up to 12,200 meters (40,000 feet) in altitude, temperatures up to 120°C (248°F). Sealed passages are available in the walls of the test chamber to accommodate controls or supply to the equipment under test, for example electrical controls, fluid supply or mechanical activation.

The bench can also be used to investigate the behaviour of intrinsically explosive products and analyse the toxic gases resulting from their explosion. For example, Lefae conducts studies on the thermal runaway of Lithium Ion cells and batteries. Explosions and fires triggered by thermal runaway are analysed to determine the explosion pressure, the fire ignition and to analyse the gases toxicity level produced during cell or battery failure.

A team of engineers and test laboratory technicians, some thirty people, supports Emitech’s customers in the execution of these high-risk tests. The test methods and equipments are implemented in compliance with the requirements of ISO 17025 standards. Measurement results and the associated test reports are established in accordance with the objectives and the requirements expressed by customers and/or regulatory authorities. Emitech is the only group in France addressing all test sequences (climatic, vibration and
explosion) in their entirety. It acts as a single point of contact, able to anticipate and deal with anomalies.