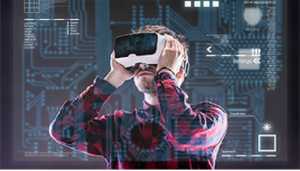 Leti, an institute of CEA-Tech, has developed a novel retinal projection concept for augmented reality (AR) uses based on a combination of integrated optics and holography. The lens-free optical system uses disruptive technologies to overcome the limitations of existing AR glasses, such as limited field-of-view and bulky optical systems.

TVs and smartphones that project digital images emit light all around them, as quasi-isotropic sources. Because the images are projected generally over the air without directivity, many viewers see the same image. In typical AR glasses, images are transmitted close to the eyes (high directivity) by a microdisplay that includes an optical system and an optical combiner.

These microdisplays create a small near-to-eye image, which is transformed by the optical system, enabling the user to see it despite the short focusing distance. The combiner superimposes the digital image to the viewers’ vision of the real environment.

CEA-Leti’s innovation is a transparent retinal-projection device that projects various light waves to the eyes from a glass surface. Images are formed in the retina by the interference of light waves, which eliminates the need for optical systems or combiners. The light propagating in the air doesn’t form an image until it interferes precisely in the retina.

CEA-Leti’s integration of the device and its use of a holographic layer also allow creation of compact AR glasses with a larger field-of-view than existing systems, while the transparent retinal projection device allows ambient light to pass through the device for enhanced AR applications.

“Combining integrated optics and holography is a new research area for the scientific community developing display applications,” said Basile Meynard, a Ph.D. student and lead author of the paper. “It is also a way to imagine a display device that works more as a data transfer system than as an imaging system.”

New Graphene-based sensor can be tuned to detect substances