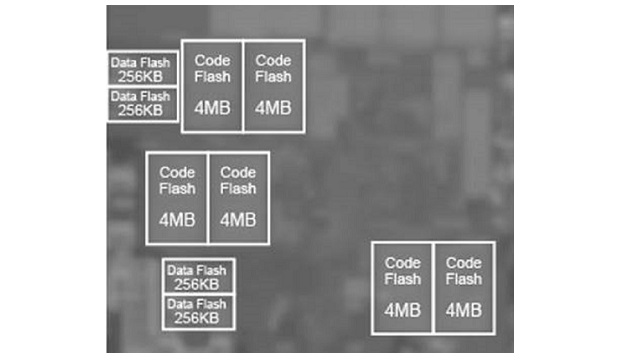 Recently in leading-edge technologies used in car systems, such as autonomous driving and electric drive, there have been increasing demands for larger embedded flash memory capacities in the MCUs due to the increasing scale of the control software. The introduction of OTA technology accelerates the demand for larger capacities to assure adequate storage area for updated programs.

Since it is necessary to assure real-time performance given the addition of new functions such as functional safety, faster random access read times from the flash memory are also strongly desired. Furthermore, regarding OTA, three things are now strongly desired. First is low-noise design so that the updated software can be stored reliably even when the car is operating. Second is reduced down time during the software switching. Third is robustness to avoid incorrect operations even if unintentional interruptions occur when updating or switching software.

The newly developed flash memory technology addresses these demands with:

Renesas continues to adopt the high-speed, high-reliability SG-MONOS technology for the embedded flash memory used in its MCUs. The memory cell size of the 28nm generation developed here is reduced by more than 15 percent, from the earlier 0.053 µm² to smaller than 0.045 µm². While suppressing increases in the chip size, this new technology allows the inclusion of 24 MB of code storage flash memory, the industry’s largest capacity for embedded flash memory. Renesas has also included 1 MB of data storage flash memory in the test chip for parameters and other data.

Word line division is an effective method for increasing the speed of random access reads in embedded flash memory. However, this division increases the number of word line drivers and causes reliability degradation due to time-dependent dielectric breakdown (TDDB) of the transistors included in those drivers and word line supply voltage drops due to increased leakage current. Renesas resolved these issues using word line driver stress mitigation and distributed word line supply voltage drivers and has verified 240 MHz high speed random access, the industry’s highest in a test chip, over a wide temperature range (junction temperatures from -40°C to 170°C).

By changing the write current applied to each memory cell between initial operation and later operation when programming the flash memory, Renesas has reduced the peak current consumption from the external power supply (Vcc) by 55 percent without reducing the throughput compared to earlier Renesas devices. This suppresses the adverse influence of supply voltage noise on the MCU itself during OTA operations when the car is running. Renesas has also applied the idea of varying the write current to high-speed write mode, in which the number of simultaneously programmed cells is increased. As a result, the new device achieves high-speed programming at 6.5 MB/s in this mode. This makes it possible to suppress the increased test times associated with the large memory capacity.

In this test chip, the code storage flash memory is divided into a storage area for software in use and a storage area for updated software. This makes it possible to switch the software in less than 1 ms (1/1000 of a second) at ignition off. Furthermore, the software switching settings are duplicated and new state flags were added to prevent incorrect operation in the event that the software updates or switching is unintentionally interrupted. This achieves, at the same time, the robust operation that allows executable control software to be selected reliably and a reduction of down time during which the car cannot be used.

The above technologies make it possible to support the increasing scales of automotive control software, high-speed real-time control, and advanced OTA. Moving forward, Renesas is committed to continued development of embedded flash memory and striving to achieve the higher capacities, higher speeds, and lower power consumption that will be required to support new applications.