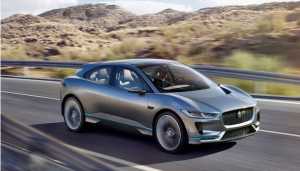 Jaguar’s first all-electric five-seater sports car I-PACE has won 2019 German Car of the Year award against 58 competitors on Monday. The fully electric SUV has earned the most number of votes from a panel of 12 expert journalists who drove 59 cars in a series of comparison tests, the automaker said.

Jens Meiners, German Car of the Year Award jury member and spokesman, said “The Jaguar I-PACE is not only the first premium electric vehicle from an established manufacturer, it also makes uncompromising use of the advantages of an electrified vehicle architecture. Its performance is impressive, and its design and practicality stand out, which is why the I-PACE ultimately was the winner against strong competition.”

The jury evaluated the design, performance, ride, handling, future viability and general relevance of each model on the road and at the Bilster Berg circuit. Electric I-PACE has topped a shortlist of five to win the award.

The company has also informed that the I-PACE has also been shortlisted for the Women’s World Car of the Year Award, along with its sister car the E-PACE compact performance SUV. The winner is slated to announce on 12 November.

Multiphase 60V Synchronous Boost Controller Provides up to 97% Efficiency with...

From The Race Track to the Street