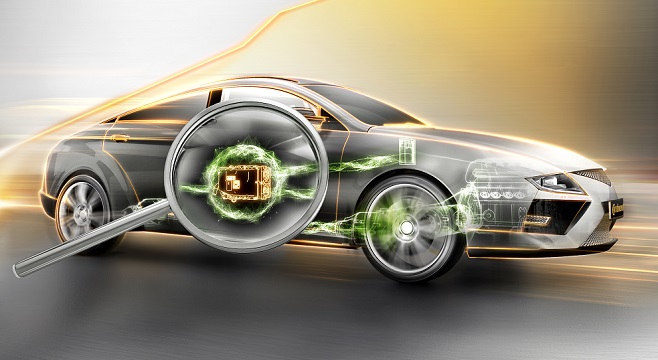 E-Automotive is the major role player of every automotive industry. India has also entered into the mainstream of e-Automotive, and has set many future aspects for the same. Many companies are planning much more beyond that.

The automotive sector has mushroomed over the years into a mature and well established industry. Innovation and manufacturing of vehicles has helped the industry to grow into a profitable one. Automobile companies have contributed significantly to the development of the world’s economy by creating jobs paying lots of taxes and earning loads of foreign exchange. There are several automobile manufacturing companies in the world that produces vehicles in a large quantity.

But, manufacturing for any technology is incomplete without the electronic elements used into it. The same goes for Automotive industry as well. Engine Management, ignition, radio, carputers, telematics, in-car entertainment systems and some basic elements which are used into the manufacturing of the Automotive.

Ignition, engine, and transmission electronics are also found in trucks, motorcycles, off-road vehicles, and other internal combustion-powered machinery such as forklifts, tractors, and excavators. Related elements for control of relevant electrical systems are found on hybrid vehicles and electric cars as well. Electronic systems have become an increasingly large component of the cost of an automobile, from only around 1% of its value in 1950 to around 30% in 2010.

The earliest electronics systems available as factory installations were vacuum tube car radios, starting in the early 1930s. The development of semiconductors after WWII greatly expanded the use of electronics in automobiles, with solid-state diodes making the automotive alternator the standard after about 1960, and the first transistorized ignition systems appearing about 1955.

Today’s automobiles contain a dozen or more processors, in functions such as engine management, transmission control, climate control, antilock braking, passive safety systems, navigation, and other functions. Modern electric cars rely on power electronics for the main propulsion motor control, as well as managing the battery system. Future autonomous cars will rely on powerful computer systems, an array of sensors, networking, and satellite navigation, all of which will require electronics.

This increasing speed of innovation in electronics for the automotive industry will pave the path for consumers to better utilize their time in transit to enjoy novel services. As a result, people will have more time to invest in personal activities. Therefore, an electronically smart car shall always have enhanced features. It is more comfortable, more secure, and more energy efficient. Recent reports and study on smart cars claim that more than 60% of the new cars will be smart by the end of this year. If this is true, then the number of consumer electronic parts in automobiles is surely going to decide the features in the cars. According to BI Intelligence, approximately 94 million smart cars are going to ship by the end of 2021. And, nearly 82% of all cars shipped by 2021 will be connected. This would result in a compound annual growth rate of nearly 35% from the current 21 million connected cars.

India is projected to become the 3rd largest manufacturer of automobiles in the world after US and China by 2020. The Auto components sector in India currently estimated at USD 39 billion (ACMA) is closely mirroring the automotive industry’s growth. With demand in place and strong government push, the stage is now set for rapid growth of auto electronics industry in India. India has received investment proposals worth over INR 1.1 trillion (USD 18 billion) in Electronics space since the start of “Make in India” campaign. There is a need for frugal innovation to design features to address specific needs of the Indian market, especially in the 2Wheeler segment. Collaboration of Indian software companies with semiconductor players will also be instrumental in development of integrated technologies. Exports will be another area of focus, especially with global OEMs increasingly setting up R&D base in the country.

Indian component makers are currently getting in line to become the global hub of innovation and promote investments in technology and research to push the Indian e-automotive market to become a global manufacturing playground.

Consumer demand and competitive pressure have pushed manufacturers to build greater intelligence into automobiles, trucks and other highway vehicles. Today, designers can draw on a breadth of increasingly powerful hardware and software technologies to create more sophisticated automotive solutions. Combined within a standards-based framework such as AUTOSAR (AUTomotive Open System ARchitecture), manufacturers can mix and match automotive subsystems to target specific levels of cost, performance and functionality. Indeed, advances in automotive technology literally stretch from bumper to bumper, but the most dramatic advances revolve around five key trends in automotive technology. Here are some technologies in e-automotive:

On asking about latest technology for e-Automotive, Sanjay Sharma, CEO of Bharti Automation Pvt. Ltd. highlighted – “Today, in our country, there is a huge requirement of Electric Vehicles, for a good atmosphere around us. For Electric Vehicles, an increase in so-called energy density either significantly extends the mileage range possible on a single charge or decreases the cost of the batteries needed to reach standard ranges. The batteries would bring an efficient advancement into the e-Automotive Industry. Upcoming batteries like Gold nanowire batteries, Grabat graphene batteries, Transparent Solar chargers would take care about fast charging as well as long lasting performance of the electric vehicles.”

Battery based German’s new startup, solar car that can charge as you drive

A Munich-based start-up has taken advantage of the strong Bavarian sun this summer to test the final development of the charging system of its Sion car, an all-electric solar vehicle that lets you charge as you drive. Germany will likely miss its target of putting 1 million electric cars on the road by 2020 but the government said in April it was ready to offer support to companies that make batteries for electric vehicles.

Sono Motors, founded in 2016, is developing the Sion, a fully-electric vehicle that has solar cells integrated into its bodywork. It can be charged via solar power, from conventional power outlets or other electric cars. Production will start in the second half of 2019 at one of its German plants and the company has around 5,000 orders which it aims to start selling at 16,000 euros ($18,540) next year. Sion will have 330 solar cells attached to the vehicle’s roof, bonnet and sides and its battery system will offer a range of around 250 km (155 miles) before it needs recharging.

“We have a seat heater, there is air conditioning, there is a large infotainment system where I can also connect my phone interactively, which means I really have a full vehicle which is very simple, has no frills,” said Laurin Hahn, Co-founder and Chief Executive of the start-up.

Faridabad based automotive components vendor The Vikas Group, which made its mark as a supplier of cooling systems to Maruti Suzuki, the country’s largest carmaker, is now aligning with the auto major’s plan to produce electric vehicles. The Rs 2,000 crore group, which has a partnership with Japanese vehicle air conditioning major Sanden, is allocating over 30% of its Rs 500 crore capex towards development of electric and hybrid vehicle solutions.

The Rs 2,000-crore group has earmarked about a third of its planned capital expenditure of Rs 500 crore for a plant that will develop solutions for electric and hybrid vehicles. Praveen Agarwal, the chairman of the Group told that electrification and hybridisation is the future and every leading automotive group needs to evolve quickly or may face the danger of being left behind. “We are not only investing in capacity, but we are focussing on capability building too. We are likely to invest Rs 150 crore in the coming years which will be towards setting up of plant for solutions for electric vehicles,” he said.

Maruti Suzuki is among the automakers that have announced plans to produce affordable electric vehicles in India in line with the government’s push to achieve 100% electric mobility by 2030 and investment by vendor fraternity like Vikas Group will help achieve them this goal. The new facility may come up in Gujarat or some other western or northern state.

Nissan to launch its Electric Car in India

The Nissan Leaf is a compact five-door hatchback electric car manufactured by Nissan and introduced in Japan and the United States in December 2010, followed by various European countries and Canada in 2011. The U.S. Environmental Protection Agency(EPA) official range for the 2016 model year Leaf with the 30 kWh battery is 172 km (107 miles) on a full battery charge, while the range with the smaller 24 kWh battery is 135 km (84 miles), the same as the 2014/15 model year. Leaf battery packs can be charged from fully discharged to 80% capacity in about 30 minutes using DC fast charging.

The Nissan Leaf produces no tailpipe pollution or greenhouse gas emissions when in operation, and contributes to reduced dependence on petroleum. In India, the model will finally go on sale in the latter part of 2018, most likely in the fourth quarter. The world’s best-selling EV it may be, but Nissan is not looking at big numbers for the Leaf in India. That’s because, the second-gen Nissan Leaf will be imported to India as a completely built unit (CBU) and in the absence of comprehensive subsidies to EVs, will be subject to the gamut of taxes on imported vehicles. With an expected price in the Rs 40-50 lakh bracket, the Leaf will be anything but a mass-market EV and is rather likely to be projected as a technology demonstrator for Nissan.

“When it comes to e-Automotive, one of the biggest challenges faced by Automotive engineers and manufacturers are those, there are insufficient testing laboratories in India to test dependability of the electronic component”, said AK Rana of Maruti Udyog Limited.  “Another challenge is the Sensor, like a glitch in any computer system, it’s possible, but unlikely, that something could go wrong with automotive sensors also, or the hardware and software connected to them, and cause safety problems”, he added.

Carbon emission is also a great challenge for automotive industry, so, the usage of fuel efficient vehicles with low greenhouse gas emissions can help reducing the carbon emission from the vehicles. Electric vehicles are therefore important for the environment so as to reduce the pollution and make a better atmosphere. Plug-in hybrid electric vehicles, Hydrogen fuel cell vehicles and Cleaner burning gasoline vehicles could also be focused more to decrease the level of carbon in the environment.

“In addition to assessing GHG impacts, the EPRI-NRDC Environmental Assessment evaluates the air quality impact of the net pollution changes in 2030 by comparing a base, non-electrified scenario with one that includes transportation electrification.

We find that electrification reduces harmful ground-level ozone, the principal component of smog, because it lowers net emissions of nitrogen oxides (NOx) and volatile organic compounds (VOC). A dominant factor in these reductions was the electrification of non-road equipment such as port cranes and cargo trucks, industrial forklifts and equipment that service aircraft when they are not flying. In most areas of the country the ozone reductions are modest (less than 1 part per billion), but larger ozone reductions are found in areas that need them the most. Many urban areas that fail to meet federal air quality standards today could see reductions of up to 3 ppb from electrification; Los Angeles and Long Beach port areas could see reductions as high as 4 ppb. These reductions could be important for achieving tighter federal ozone standards. But improve the the system of battery disposal for environmental pollution”, said Virender Kumar, Deputy Manager of Lumax Industries Limited.