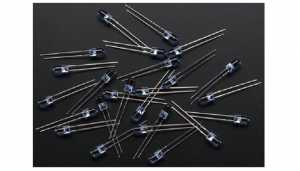 The IR LED market is expected to see significant growth due to increasing demand for cameras with night-vision capabilities and remote sensing in the automotive and consumer electronics industries.

Moreover, the IR LED market has tremendous opportunities for future growth with integration into wearable devices such as augmented reality (AR)/virtual reality (VR) and with the emergence of Internet of Things (IoT)-enabled devices.

By wavelength range, the 700-850nm and 850-940nm segments are expected to grow at a CAGR of over 17%, due to increasing use in numerous applications, especially in the automotive and industrial sectors for 850-940nm.

A growth segment in the infrared LED market is the biometrics industry, due to increasing adoption of iris and facial recognition in electronic devices, driven by mobile payment services that create the need for secure and reliable authentication for users. Several LED makers are taking advantage of these opportunities and are launching advanced components for biometric applications. For example, Chinese electronics retailer GOME recently collaborated with German LED maker Osram Opto Semiconductors GmbH to integrate infrared components for iris recognition technology into all their smartphones. The growing global smartphone industry is projected to boost the IR LED market for iris and facial recognition.

Vendors in the infrared LED market space include Everlight, Vishay Intertechnology, Epistar, and Rohm Semiconductor. To cater to demand from growing applications in consumer electronics, the industry is seeing extensive investment in IR LEDs. To gain market share, players have been focusing on new product launches and targeting the consumer electronics segment. In 2018, Osram Opto Semiconductors has expanded its product portfolio by announcing six new IR LEDs (IREDs) for automotive use, including 850nm components for applications such as pedestrian protection, night vision and other exterior applications and 940nm components for applications such as gesture recognition, driver monitoring, and other interior applications.

Considering the demand and huge potential, several companies in the industry have shifted their focus to the infrared LED market. For example, in 2017 Everlight reported that IR LEDs contributed 25% of its total revenue. For Epistar, its market share in these LED chips was over 10% of all aluminium gallium indium phosphide (AlGaInP) chip output in 2015, the report notes.