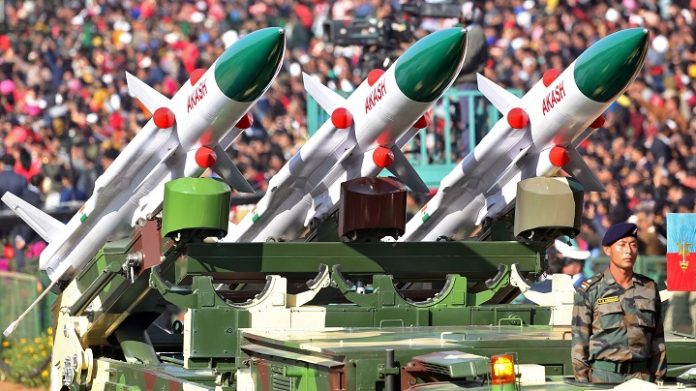 India’s arms imports saw a 33 per cent drop between 2011-15 and 2016-20, with sales from Russia hit the hardest even as Moscow increased its exports to Beijing, new data shows.

In a report published recently, Swedish think-tank Stockholm International Peace Research Institute (SIPRI) said Russia witnessed a 53 per cent fall in its arms exports to India even as Delhi’s imports from Paris increased.

The report said the drop in Indian arms imports seems to have been mainly on account of its complex procurement processes, combined with an attempt to reduce its dependence on Russian arms. It added that India is planning large-scale arms imports in the coming years from several suppliers.

The new data comes at a time when the Narendra Modi government is taking steps to reduce imports with a focus on Make in India.

In a written reply to the Rajya Sabha, the Ministry of Defence said 304 contracts were signed for the modernisation of armed forces in the previous five fiscals (2015-16 to 2019-20) and the current financial year (up to January 2021).

Out of the total, 190 contracts were signed with Indian vendors for capital procurement of defence equipment for armed forces.

In August last year, the government had released a negative list of 101 imports and their time tables. At the time, the ministry had said almost 260 schemes of such items were contracted by the tri-services at an approximate cost of Rs 3.5 lakh crore between April 2015 and August 2020.

With the latest embargo on the import of 101 items, it is estimated that contracts worth almost Rs 4 lakh crore will be placed with the domestic industry within the next five to seven years.

In its report in April 2020, SIPRI had said with an expenditure of $71.1 billion in 2019, India emerged as the third-largest military spender in the world, just behind the US and China.

India and Global Trends
According to the latest SIPRI report, the US remains the largest arms exporter, increasing its global share of arms exports from 32 to 37 per cent between 2011-15 and 2016-20.

The US supplied major arms to 96 states in 2016-20, far more than any other supplier. Almost half (47 per cent) of these transfers went to the Middle East. Saudi Arabia alone accounted for 24 per cent of total US arms exports.

The rise in US arms exports between 2011-15 and 2016-20 further widened the gap between the US and the second-largest arms exporter, Russia, the report said.

“The bulk — around 90 per cent — of this decrease was attributable to a 53 per cent fall in its arms exports to India,” the report said.

Russia substantially increased its arms transfers to China, Algeria and Egypt between 2011-15 and 2016-20, but this did not offset the large drop in its arms exports to India, said Alexandra Kuimova, a researcher with the SIPRI Arms and Military Expenditure Programme.

The report said France increased its exports of major arms by 44 per cent and accounted for 8.2 per cent of global arms exports in 2016-20. India, Egypt and Qatar together received 59 per cent of the French exports.