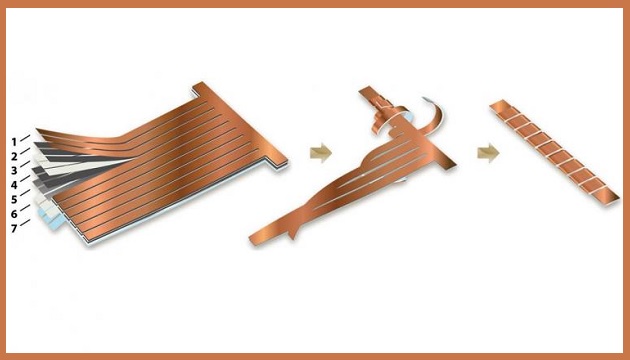 Researchers have designed and tested a battery with a mechanical design that mimics the spine of vertebrates, yielding a very flexible cell with a capacity close to that of a conventional rigid cell.

Rechargeable batteries based on lithium-ion (Li-ion) chemistry are the preferred energy-storage cell in applications such as wearables, flexible displays, and even transdermal patches. However, providing extreme flexibility while retaining their high energy density has been a challenge. To overcome this problem, a 14-member research team led by Prof. Yuan Yang of the engineering school at Columbia University (New York) modelled, designed, built, and fully evaluated a configuration that emulates the spine of vertebrates, while providing 85% of the energy density of a prismatic Li-ion cell with equivalent volume.

Their design, which was “inspired” by the suppleness of the spine as observed when doing sit-ups and other exercises, has excellent mechanical flexibility along with stable output voltage even while flexing. The physical implementation is scalable to longer lengths and larger capacities.

Like the biological spine configuration on which it’s based, this battery prototype has a thick, rigid segment that stores energy—the electrodes (analogous to the vertebrae) are wound around a thin, flexible part (the “marrow”) that connects the vertebra-like stacks of electrodes together (see figure). Yang noted that “because of the high proportion of the active materials in the whole structure, our spine-like battery shows very high energy density—higher than any other reports we are aware of.” 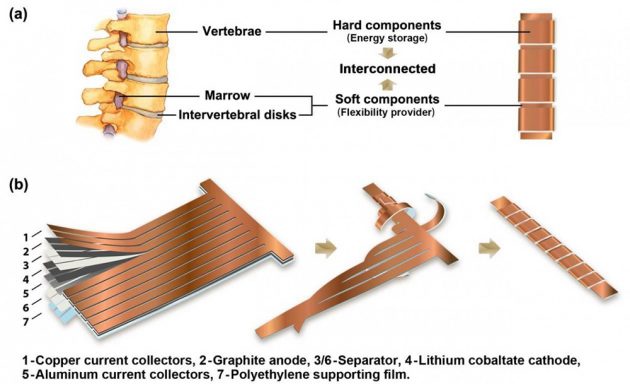 To build the battery, the team cut the conventional anode/separator/cathode/separator stacks into long strips with multiple “branches” extending outward at 90 degrees from the “backbone.” Next, they wrapped each branch around the backbone to form thick stacks for storing energy, like spinal vertebrae. The battery’s energy density is a function of the ratio of the longitudinal percentage of vertebra-like stacks compared to the whole length of the device, and can reach over 90% in theory; the prototype was very close at 85% (242 W-hr/L).

In a battery designated for flexing, the long-term mechanical integrity is critical in addition to electrical performance. After repeated mechanical cycling, the battery was cut open to look for any changes in electrode materials or construction. The positive electrode was intact with no obvious cracking or peeling from the aluminum foil, confirming the mechanical stability of the design.