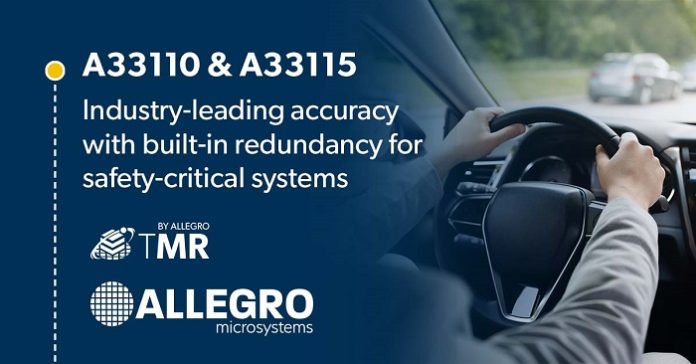 Allegro MicroSystems, Inc. (“Allegro”) today announced the launch of its A33110 and A33115 magnetic position sensors at the Sensors Converge Conference in San Jose, CA. Designed for advanced driver assistance systems (ADAS) applications that require high levels of accuracy and heterogeneous signal redundancy, Allegro’s newest sensors combine the company’s vertical Hall technology (VHT) with cutting-edge tunneling magnetoresistance (TMR) technology in a single sensor package. These groundbreaking angle sensors are the first of their kind to feature this technology combination in a single package. This VHT + TMR offering is a superior heterogeneous redundant sensor solution and is an essential step toward enabling the reliability required for advanced levels of automation in vehicles.

The safe operation of a vehicle requires the highest level of diagnostic coverage in its safety-critical systems. Allegro’s VHT featured in the new A33110 and A33115 enables accurate safety checks, including low-field and missing-magnet detection. These high-resolution sensors are ASIL D-compliant, with heterogeneous redundancy reducing the likelihood of dependent failures by leveraging the best of both TMR technology and VHT.

“As full autonomy comes closer to being a reality, automakers and Tier 1 suppliers are looking for position sensors that provide the greatest accuracy and safety while reducing system footprint and cost,” said Scott Milne, Business Line Director for Position Sensors at Allegro. “By integrating both vertical Hall and TMR elements in a single package, Allegro’s new line of sensors enables customers to meet those needs with a sensor that provides high resolution and heterogeneous redundancy along with integrated diagnostics. There’s nothing else on the market like them, and we think they are a game-changer for the industry.”

Allegro’s A33110 and A33115 sensors provide magnetic angle sensing via both the primary (TMR) and secondary (vertical Hall) transducers, each of which is processed by two independent channels, each with independent regulators and temperature sensors. This unique configuration enables the high levels of safety and diagnostic coverage needed for automated driving, including on-chip channel-to-channel angle comparison and independent processing in digital signal paths, with no shared digital resources. Advanced algorithms in the A33110 and A33115 deliver the fast response time, independent gain/offset correction, angle calculation, and linearization capabilities demanded by safety-critical ADAS applications. The A33115 also includes a turn counter that tracks motion in 90-degree increments and a low-power mode with a user-programmable duty cycle that reduces power consumption when the IC is in a key-off position.

Allegro MicroSystems ships more than 200 million units into ADAS applications annually, serving a global and diverse customer base. The A33110 and A33115 are the latest in Allegro’s portfolio of innovations for ADAS applications and were developed in close collaboration with key market-leading OEM and Tier 1 customers.