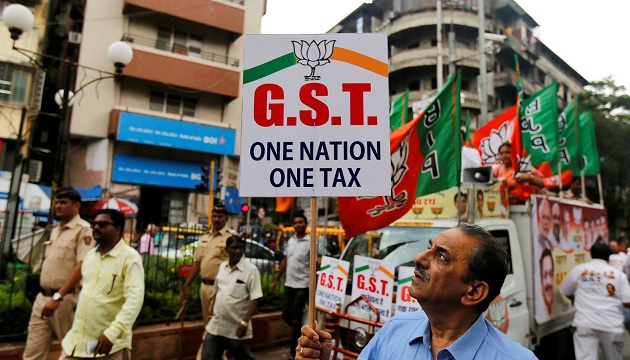 GST has been largely successful in a very short period of time. But, the electronics industry is aggrieved at being placed under the 18 per cent tax slab. This special report brings out the market response following GST. And amid alarming signs, the Lutyens should be listening.

On July 1, 2017, India’s Finance Minister Arun Jaitley announced an unprecedented tax reform- GST. Under the new tax rules, the entire nation would be bound by one tax. Unlike before, the need to pay varied kinds of state and central taxes was lifted and GST unified all those taxes into one. The motto went, “One nation, One Tax”. At the time of announcement, people reacted to the new hurricane in different ways. From the Opposition’s jibe on GST as the Gabbar Singh Tax, to PM Modi’s defence of GST as a Good and Simple Tax; the nation’s marquee tax reform has divided opinions. But, the important question is, who is right about GST? And after almost a year of implementation, has GST paid the dividends that the FM boasted it would?

To begin with, the success of GST can not be defined in mere binary terms. And neither can it be defined in mere black or white. Just like everything else, it is the infinite number of greys between the black and white that will tell the real GST story. But amid such political furore, in what is arguably one of the biggest decisions of any central government, India’s marquee tax reform seems to be at risk. Apart from just political scrutiny, the fact prevails that GST is a work in progress. It is a revolutionary reform, and to judge its validity in a diverse land like India only within a year would be being absolutely banal. GST aimed at bringing India closer. It aimed at increasing ease of doing business in the country. And more than all that, it aimed at justifying the true meaning of democracy.  There is however one problem: If you’re forced to drive a right hand car after fifty years of driving left hand vehicles, you will face a problem. That is, if you’re not used to doing something for the better part of your life, chances are that you’ll never do those things ever again. And in India, one thing that a lot of people weren’t used to of doing was paying taxes.

Call it harsh criticism, but the truth remains unchanged. The FM knew that, and so did the PM. And to increase the taxpayer pool in India, something like the GST was absolutely necessary. There is a place in New Delhi called Sudarshan Park. There you can find a lot of electronics traders who operate from their very own homes. And most of the transactions there are carried out by cash. It won’t take an Einstein to figure out, but we can agree that those people surely don’t pay taxes. However, the GST, and before that demonetisation aimed at working in synergy to bring as many people as possible in the formal economy. But, has it?For people in the electronics industry who diligently kept records and paid taxes, GST has made no difference at all. Krishan Sujan of MLS India, a renowned electronics distributor said, “GST implementation hasn’t changed a thing in our business. Things are just like they used to be before.” Similarly, Ashish Takiar of Takiar Overseas said, “our business is unaffected from GST.” One thing that we can sense from the get go then, is that for the faithful taxpayer, GST implementation has been just like Tsunami for North India.

But, what good is a tax reform for if it doesn’t benefit the local industry? After all, industries boost the growth of any nation. It turns out, the implementation of GST has brought a lot of good things for India’s local electronics industry. For years, it has failed to compete against bigger foreign companies. And as a result, indigenous manufacturing has largely been dormant. The big companies kept on getting bigger. And a lot of the smaller ones disappeared from the grid. The problems in India had always been of a mismatched playground. The local electronics industry had always been an underdog. But, over the course of the last year, things have changed; courtesy GST. It makes for a perfect David and Goliath story. GST has helped the David in fighting bigger pressures. “GST has brought about a lot of competition in the market. But more importantly, it has brought about equality,” said Takiar.  Aside from the electronics industry, a lot of OEMs (Original Equipment Manufacturers) have also benefitted from GST. OEMs had to face the brunt of foregone indirect tax regime. However, with the new unified tax structure, OEMs can start producing items and components at cheaper costs. This adds a lot of meaningto value chain of the electronics industry.

So far, it is clear that GST has given the domestic electronics industry the much needed thrust to keep end costs down and remain competitive against bigger players. However, we don’t live in a utopian world. And that means, it is not all hunky dory in the land of the Golden Bird. India’s top drawer politicians have expressed contrary reactions to the new tax laws. And similarly, the people in the business tell different stories. When ELE Times contacted Ashish Takiar and Krishan Sujan, the sentiments were uplifting. But for a story to be complete, it should be told from every angle possible.And the other narrative of GST is if it has managed to pull more people into the taxpayer base. During the indirect tax regime,an electronics dealer had to pay Excise duty along with VAT (Value Added Taxes),of about 17.53 per cent. After extensive ground survey, ELE Times learned that of the 17.53 per cent, tax evaders used to easily evade more than 70 per cent. So, naturally, one would argue that following GST, it would have become extremely difficult for people to evade taxes.

Navneet Kohli of BP Impex, which is a company that deals in electronic components said,“after getting a refund of 18 per cent following GST, people are now importing on net zero duty.” But more than that, the biggest flaw in GST, especially for the electronics industry lies in its very policy making. You see, most of the electronics items are placed in the 18 per cent tax slab. That is a very high number. Now, it has been done with the aim of promoting manufacturing in the local industry. But, is India ready to manufacture world-class items and components that can compete against foreign made goods? Krishan Sujan says that the answer to that question is a big no. He told ELE Times a very specific and interesting story about casings used in LED bulbs. “Casings can be made in India today. That is not an issue. But, the problem is that the quality of the casings made in India is extremely low compared to Chinese imports,” said Sujan. If we move away from casings to other products, there seems hardly any item that India makes better than its foreign counterparts. The point is, for manufacturing prowess and quality of produce to grow, you surely need government incentives. But, more than that, you need manufacturing itself to grow. And unfortunately, that hasn’t happened in India yet. Why then the government has decided to tax electronic items at a high 18 per cent might be a question that fazes a lot of people.

Had the government decided to place the electronics sector in a lower 12 per cent tax slab, it would have changed the scenario altogether. Let’s begin this by talking some numbers. If someone wants to evade taxes, that doesn’t happen for free. A person has to pay money to do that. Now, Navneet Kohli says that in order to evade taxes, a person needs to spend about 6 per cent of his profits. Had the tax slab been of 12 per cent, it leaves a margin of a mere 6 per cent for any evader. Whereas in the 18 per cent slab, the margin that remains is 12 per cent- double. So naturally, it becomes more feasible and profitable to cut corners when the industry is under the 18 per cent tax slab. But, like we’ve established before, not everyone evades taxes. So is the GST all hunky dory for them? Kohli has an interesting take on it. “If I make a profit of Rs 100, I have to pay 18 per cent GST on that. That leaves my margin to be 82 per cent. Now, on that 82 per cent, I have to pay an additional income tax of 30 per cent every year. That means I’m paying 48 per cent of my profit to the government. Before GST, it used to be 35 per cent,” said Kohli. For a medium sized company, that means paying something between Rs 20-25 lakh of tax to the government each year. Perhaps this encourages evaders even more to not pay taxes.

Then, there is the problem with the components that any dealer had stocked prior to GST. You see, the electronics industry is not like the apparel industry. People love to go to malls and they buy garments when there is a discount going on. With the electronics components industry, there is neither much glamour, nor much appeal. This has resulted in most electronics distributors in India today to be overstocked. And when a company is not doing good business, they can’t pass on the benefits to their customers. This hampers the entire value chain’s quality and profitability. “Had I known about the GST (Goods and Service Tax) reform and the problems that it will cause the local electronics industry, I would have never voted for the Modi government in 2014,” Kohli said. His statement might sound a bit outlandish, but the general sentiment in the industry is of utter frustration. The market hasn’t done well over the course of the last year, and things are not looking very bright for the future.

Except, all that could change with only a handful of governmental interventions. GST is currently in its nascent stage, so criticising it too hard would be wrong on anyone’s part. Implementing such a big rule in such a diverse land is a big step, and the current NDA government surely should be commended for that. However, there are loopholes in the reforms and a lot of people can still find their way beyond the black and white. Respite will come when the electronics industry will be taxed at a lower 12 per cent. That would solve more than half of the problems that prevail today. Apart from that, the government should look forward to give some kind of subsidy and incentives to MSMEs and SMEs for them to remain competitive. Merely increasing customs duty will not help in promoting local manufacturing. The decision to reduce corporate tax from 30 per cent to 25 per cent in the Union Budget 2018 is a welcome move. But, more such reforms need to come around for India’s marquee tax reform to become the success we all want it to be.