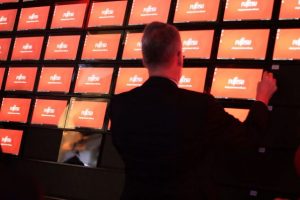 More than 60 Fujitsu customers helped co-create a new GUINNESS WORLD RECORDS title last night at the BMW Museum in Munich: Largest animated tablet computer mosaic. A total of 220 Fujitsu STYLISTIC R726 tablets were used to create on-screen artwork, which was then brought together to form a single large piece of art – a visual representation of co-creation in the form of an origami-styled landscape, which came alive with Japanese cherry blossoms and fluttering birds.

The successful world record – verified by GUINNESS WORLD RECORDS adjudicators – was created at the BMW Museum in Munich, during a customer dinner as part of Fujitsu’s annual event – Fujitsu Forum Munich. Customers attending the dinner contributed to the mosaic by each inserting at least one tile, in the form of a Fujitsu STYLISTIC R726 12.5-inch tablet, into a specially prepared wall. The finished mosaic showed the Fujitsu Forum image – which, on completion, transformed to reveal a moving digital landscape featuring a cherry tree, which came alive with blossoming flowers, symbolizing the fragility and beauty of life. GUINNESS WORLD RECORDS adjudicators confirmed the successful attempt and documented this record-breaking world achievement.

Duncan Tait, Corporate Executive Officer, SEVP and Head of Americas and EMEIA at Fujitsu, comments: “Co-creating a digital future with our customers is fundamental to the way Fujitsu approaches business. We’ve highlighted this focus with the theme for this year’s Fujitsu Forum “Human Centric Innovation – Digital Co-creation” which for us means bringing together the latest digital technology and expertise to create new possibilities for business and society. Achieving this GUINNESS WORLD RECORDS title with our customers epitomizes this approach. The final image stylized Japanese landscape highlights how each collaborator has something important to contribute, to create a whole that is greater than the sum of its parts.”

Anna Orford, GUINNESS WORLD RECORDS adjudicator, adds: “GUINNESS WORLD RECORDS are synonymous with extraordinary achievement. We research, measure, document and authorize the word’s superlatives. We also strive to maintain our high standards and have strict policies governing what makes a world record. We were on hand to monitor the attempt to create a new world record, the world’s largest digital mosaic, and we confirm that Fujitsu is now included among the ranks of current GUINNESS WORLD RECORDS title holders. Congratulations to all who participated in this successful attempt.”

Fujitsu has a long history of more than 80 years in the ICT industry with a 25-year track record in producing tablets. With a 12.5-inch screen, the STYLISTIC R726 is designed for business professionals on the move and features full LTE/4G connectivity as well as security features such as encrypted drives and NFC-based authentication. Designed to offer unrivaled flexibility and portability while enhancing productivity, the STYLISTIC R726 transforms into a full performance and full productivity notebook by simply attaching the slim magnetic keyboard.