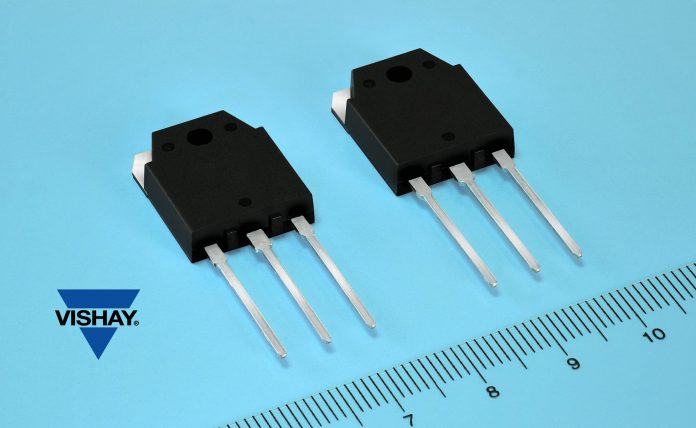 “We are committed to providing our customers with a broad line of MOSFET technologies that support all stages of the power conversion process, from high-voltage inputs to the low-voltage outputs required by the latest electronic systems,” said David Grey, senior director of market development for Vishay. “With the SiHP065N60E and the upcoming fourth-generation 600 V E Series family, we are addressing the need for efficiency and power density improvements in the first stages of the power system architecture — power factor correction and subsequent high-voltage DC/DC converter blocks.”

Built on Vishay’s latest energy-efficient E-Series super-junction technology, the SiHP065N60E features low maximum on-resistance of 0.065 Ω at 10 V and ultra-low gate charge down to 49 nC. The device’s FOM of 2.8 Ω*nC is 25 % lower than the closest competing MOSFET in the same class. For improved switching performance, the SiHP065N60E provides low effective output capacitances Co(er) and Co(tr) of 93 pf and 593 pF, respectively. These values translate into reduced conduction and switching losses to save energy in power factor correction and hard-switched DC/DC converter topologies for telecom, industrial, and enterprise power systems.

Offered in the TO-220AB package, the device released is RoHS-compliant, halogen-free, and designed to withstand overvoltage transients in the avalanche mode with guaranteed limits through 100 % UIS testing.

Samples and production quantities of the SiHP065N60E are available now, with lead times of 10 weeks.

Innovations in MEMS Timing for 5G and IoT

Digilent Projects helping you out with your next Pmods and Arduino...