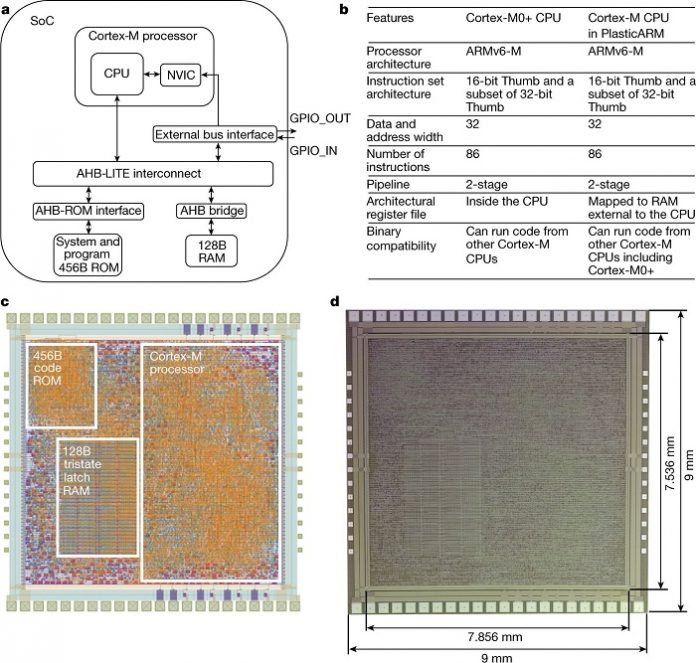 A team of researchers at ARM Inc., has developed a 32-bit microprocessor on a flexible base which the company claims could pave the way to fully flexible smart integrated systems. The researchers group describes how they used metal−oxide thin-film transistors along with a type of plastic to create their chip and outline ways they believe it could be used.

Microprocessors power a wide range of products, but what they all have in common is their stiffness. Almost all of them are made using silicon wafers, which means that they have to be hard and flat. This inability to bend, the researchers with this new effort contend, is what is preventing the development of products such as smart clothes, smart labels on foods, packaging and even paper products. To meet that need, the team has created what they describe as the PlasticARM—a RISC-based 32-bit microprocessor set on a flexible base. In addition to its flexibility, the new technique allows for printing a microprocessor onto many types of materials, all at low cost.

To create their bendy microprocessor, the researchers teamed with a group at PragmatIC Semiconductor to create a bendable version of the Cortex M0+ microprocessor, which was chosen for its simplicity and small size. To make their chip, (which includes ROM, RAM and interconnections) the team used amorphous silicon fabricated (in the form of metal-oxide thin-film transistors) onto flexible polymers.

In the first iteration of their PlasticARM, the researchers put the registers used by the CPU in a reserved part of RAM, and only 128 bytes of RAM were used. The resulting microprocessor was bendable, but it was neither efficient nor fast. Also, it did not have any programable memory. But the researchers note that they are just beginning. They suggest their work thus far has shown that it is possible to make viable flexible microprocessors, which means that eventually, it could be possible to print them onto clothes and other wearable devices at very low cost. They estimate that trillions of objects in the coming decades will be outfitted with processing power, including chips that can tell you if the milk is sour, shirts that can measure body fluids to be processed by your smartphone, and labels you can paste onto to your skin to warn others of your mood. The possibilities will be constrained only by the imagination.