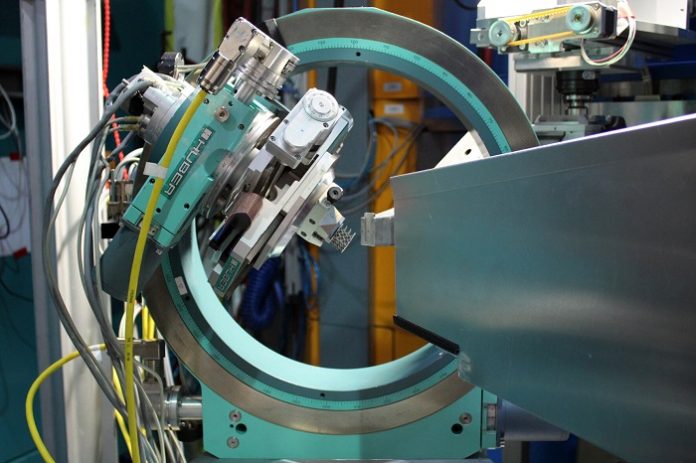 3D printing has opened up a completely new range of possibilities. One example is the production of novel turbine buckets. However, the 3D printing process often induces internal stress in the components, which can, in the worst case, lead to cracks. Now a research team has succeeded in using neutrons from the Technical University of Munich (TUM) research neutron source for non-destructive detection of this internal stress—a key achievement for the improvement of the production processes.

These turbine buckets can be made using laser powder bed fusion, an additive manufacturing technology: Here, the starter material in powder form is built up layer by layer by selective melting with a laser. Following the example of avian bones, intricate lattice structures inside the hollow turbine buckets provide the part with the necessary stability.

The manufacturing process creates internal stress in the material

Complex components with such intricate structures would be impossible to make using conventional manufacturing methods like casting or milling.

But the laser’s highly localized heat input and the rapid cooling of the melt pool lead to residual stress in the material. Manufacturers usually eliminate such stress in a downstream heat-treatment step, which takes time and thus costs money.

Unfortunately, these stresses can also damage the components as early as during the production process and up until post-processing takes place. The stress can result in deformations and in the worst cases lead to cracks.

For the neutron experiment at the FRM II, Siemens Energy printed a lattice structure only a few millimeters in size using a nickel-chrome alloy typical of those used for gas turbine components. The usual heat treatment after production was intentionally omitted.

The team wanted to see whether or not they could use neutrons to detect internal stresses in this complex component. He had already gained experience with neutron measurements at the Berlin research reactor BER II, which however was shut down in late 2019.

Even distribution of heat during printing

Now that the team has succeeded in detecting the internal stress within the component, the next step is to reduce this destructive stress. They know that they have to modify the production process parameters and thus the way in which the component is built up during printing. Here the crucial factor is the heat input over time when building up the individual layers. The more localized the heat application is during the melting process, the more internal stress results.

For as long as the printer’s laser is aimed at a given point, the heat of the point rises relative to adjacent areas. This results in temperature gradients that lead to irregularities in the atomic lattice.