Emirate’s skies to be soon buzzing with Drone Taxis 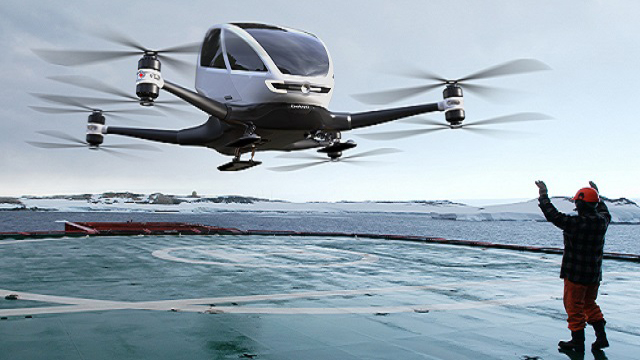 Like in sci-fi movies, the denizens of Dubai will soon be flying across the city in automated flying taxis, at the push of a button.

The eight-rotor, passenger drone, has enough room for a maximum 220 pound weighing passenger, along with a small suitcase and functions on auto-pilot mode. The service to begin as early as July, 2017, according to the director of the city’s transportation authority, is a part of an ambitious plan to increase driverless technology.

The Ehang was first unveiled at CES in 2016, as part of its transport system. Prior to dubai, Las Vegas announced last year that it would start trialing the drones for public use.

The drone is electric-powered and can travel for about 31 miles and can go at speeds of up to 63 miles an hour and takes two hours to charge fully.

The drone “is not just a model but it has really flown in Dubai skies,” Mattar Al Tayer, the director general of Dubai’s Roads and Transport Authority, said on February 13, 2017, adding that the emirate would “spare no effort to launch” autonomous aerial vehicles by July.

The Ehang 184 can fly up to 31 miles, or about 30 minutes, on a single battery charge. It has a top speed of 100 miles per hour, but the authorities said it would typically operate at 62 m.p.h.

A promotional video, on the device describes the Ehang 184 drone as “autopiloted, directed and monitored via a command center.”

According to the manufacturer, the drone is equipped with fail-safe technology and in the case of any technical glitch the machine “will immediately land in the nearest possible area to ensure safety.”

It has come along as measures to impose cutting-edge technology to help with the city’s congested roadways.

The ruler of Dubai, Sheikh Mohammed bin Rashid Al Maktoum, announced last year that 25 percent of all journeys in the city would be conducted by driverless vehicles by 2030.

In October, the city signed a deal with the Los Angeles-based Hyperloop One to study the potential for a hyperloop — a vacuum-like tube through which vehicle pods hurtle at speeds faster than airliners — between Dubai and Abu Dhabi, the United Arab Emirates capital.