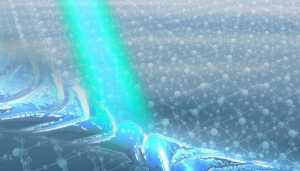 Squeezed light in the nanoscale (nanolight) was found to propagate only in specific directions along thin slabs of a natural anisotropic 2D material, molybdenum trioxide (α-MoO3). The discovery was made by an international team of researchers from Monash University, University of Oviedo, CIC nanoGUNE, and Soochow University.

Strong light squeezing has previously been achieved in 2D materials like graphene and hexagonal boron nitride. However, the polaritons, the electromagnetic waves resulting from the coupling of light and matter, used with these materials have always been found to propagate along all directions of the material surface, thereby losing their energy quickly. This property has limited their use.

Using IR nano-imaging and nano-spectroscopy, the researchers visualized and verified phonon polaritons with elliptic and hyperbolic in-plane dispersion, and with wavelengths comparable to those of graphene plasmon polaritons and boron nitride phonon polaritons, on semiconducting α-MoO3 flakes and disks.

“We have realized that light squeezed in α-MoO3 can become ‘hyperbolic,’ making the energy and wave-fronts propagate in different directions along the surface, which can lead to interesting exotic effects in optics such as negative refraction or superlensing,” said researcher Alexey Nikitin at Donostia International Physics Center.

The researchers said that theoretically, the ability of polaritons to propagate anisotropically along the surface of 2D materials would mean that the velocity and wavelength of the polaritons would depend on the direction in which they propagated. This property could lead to highly directional polariton propagation in the form of nanoscale confined rays.

“Until now, the directional propagation of polaritons has been observed experimentally only in artificially structured materials, where the ultimate polariton confinement is much more difficult to achieve than in natural materials,” said researcher Shaojuan Li from Soochow.

The study also revealed that the polaritons on α-MoO3 can have an extraordinarily long lifetime. “Light seems to take a nanoscale highway on α-MoO3,” said Pablo Alonso-González from Oviedo. “It travels along certain directions with almost no obstacles. Our measurements show that polaritons on α-MoO3 live up to 20 picoseconds, which is 40 times larger than the best-possible polariton lifetime in high-quality graphene at room temperature.”

In-plane anisotropic and ultralow-loss polaritons in natural 2D materials could enable directional and strong light-matter interactions, nanoscale directional energy transfer, and integrated flat optics in applications ranging from biosensing to quantum nanophotonics. Because the nanolight lives for an exceptionally long time, it could find applications in signal processing or heat management at the nanoscale.

The current work is the beginning of a series of studies that will be focused on directional control and manipulation of light using ultralow-loss polaritons at the nanoscale, said the researchers.