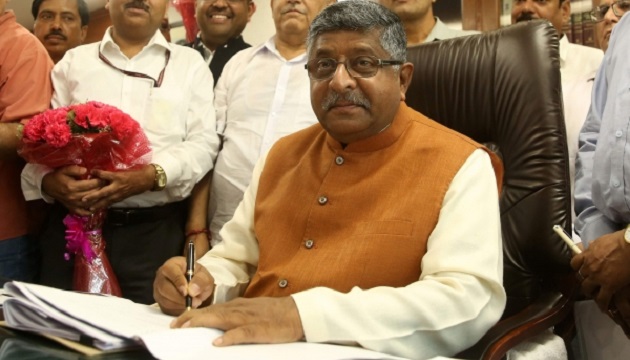 Taking charge of the ministry of communications in the new Modi Government, Ravi Shankar Prasad announced to conduct the 5G trials in 100 days.

India will hold its next spectrum sale, which will mark the debut of 5G airwaves, in 2019, and conduct 5G trials within 100 days, new telecom minister Ravi Shankar Prasad said, adding that he would talk to the debt-laden industry to understand and address issues of financial stress.

With the charge of information technology ministry, the media industries were also warned for not letting their platforms abused for criminal activities like violence and extremism.

He also ensured to try and bring greater synergies between the IT and telecom ministries.“As far as 5G network is concerned, we will start trials in 100 days,” the minister said, referring to the next-generation mobile communications standard that supports faster data speeds. The government said 5G will play a major role in digital inclusion, social causes, education and health, and bringing technology to rural people.

“I am of the belief that in the current calendar year, we will auction spectrum,” Prasad said. “TRAI has given its recommendation on spectrum… whether there is a need for more consultation with TRAI, we will have to look into it.”

The minister’s other priorities include the revival of state-run Bharat Sanchar Nigam Ltd. and Mahanagar Telephone Nigam Ltd. and the creation of a Broadband Readiness Index, fast-tracking of half a million Wi-Fi hotspots and promoting telecom manufacturing in India.

Taking charge of the ministry of information technology and electronics, Prasad said the government will work towards establishing a National Data Grid on a priority basis which, along with the data protection act, could establish the bedrock for localising all data related to Indian citizens.

Prasad’s tasks will include promoting the startup ecosystem by creating a startup hub, pushing electronic manufacturing and the local manufacture of equipment, including medical devices such as MRI machines, radiation and radiology equipment.