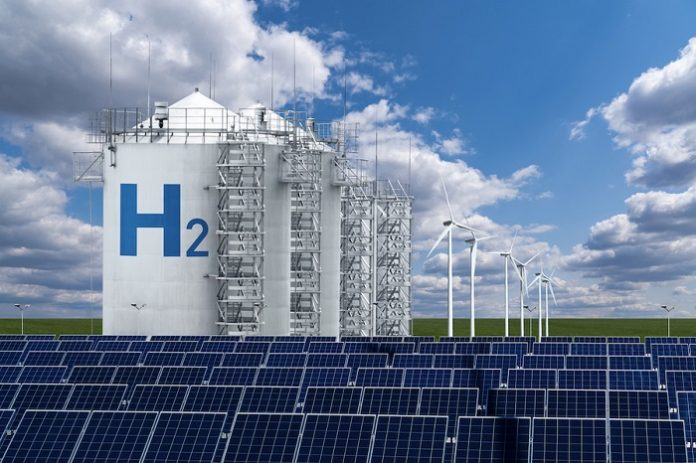 Governments and companies worldwide are increasing their investments in hydrogen research and development, indicating a growing recognition that hydrogen could play a significant role in meeting global energy system decarbonization goals. Since hydrogen is light, energy-dense, storable, and produces no direct carbon dioxide emissions at the point of use, this versatile energy carrier has the potential to be harnessed in a variety of ways in a future clean energy system.

Often considered in the context of grid-scale energy storage, hydrogen has garnered renewed interest, in part due to expectations that our future electric grid will be dominated by variable renewable energy (VRE) sources such as wind and solar, as well as decreasing costs for water electrolyzers—both of which could make clean, “green” hydrogen more cost-competitive with fossil-fuel-based production. But hydrogen’s versatility as a clean energy fuel also makes it an attractive option to meet energy demand and to open pathways for decarbonization in hard-to-abate sectors where direct electrification is difficult, such as transportation, buildings, and industry.

“We’ve seen a lot of progress and analysis around pathways to decarbonize electricity, but we may not be able to electrify all end uses. This means that just decarbonizing electricity supply is not sufficient, and we must develop other decarbonization strategies as well,” says Dharik Mallapragada, a research scientist at the MIT Energy Initiative (MITEI). “Hydrogen is an interesting energy carrier to explore, but understanding the role for hydrogen requires us to study the interactions between the electricity system and a future hydrogen supply chain.”

In a recent paper, researchers from MIT and Shell present a framework to systematically study the role and impact of hydrogen-based technology pathways in a future low-carbon, integrated energy system, taking into account interactions with the electric grid and the spatio-temporal variations in energy demand and supply. The developed framework co-optimizes infrastructure investment and operation across the electricity and hydrogen supply chain under various emissions price scenarios. When applied to a Northeast U.S. case study, the researchers find this approach results in substantial benefits—in terms of costs and emissions reduction—as it takes advantage of hydrogen’s potential to provide the electricity system with a large flexible load when produced through electrolysis, while also enabling decarbonization of difficult-to-electrify, end-use sectors.

The research team includes Mallapragada; Guannan He, a postdoc at MITEI; Abhishek Bose, a graduate research assistant at MITEI; Clara Heuberger-Austin, a researcher at Shell; and Emre Gençer, a research scientist at MITEI.

“We need a cross-sector framework to analyze each energy carrier’s economics and role across multiple systems if we are to really understand the cost/benefits of direct electrification or other decarbonization strategies,” says He.

To do that analysis, the team developed the Decision Optimization of Low-carbon Power-HYdrogen Network (DOLPHYN) model, which allows the user to study the role of hydrogen in low-carbon energy systems, the effects of coupling the power and hydrogen sectors, and the trade-offs between various technology options across both supply chains—spanning production, transport, storage, and end use, and their impact on decarbonization goals.

“We are seeing great interest from industry and government, because they are all asking questions about where to invest their money and how to prioritize their decarbonization strategies,” says Gençer. Heuberger-Austin adds, “Being able to assess the system-level interactions between electricity and the emerging hydrogen economy is of paramount importance to drive technology development and support strategic value chain decisions. The DOLPHYN model can be instrumental in tackling those kinds of questions.”

For a predefined set of electricity and hydrogen demand scenarios, the model determines the least-cost technology mix across the power and hydrogen sectors while adhering to a variety of operation and policy constraints. The model can incorporate a range of technology options—from VRE generation to carbon capture and storage (CCS) used with both power and hydrogen generation to trucks and pipelines used for hydrogen transport. With its flexible structure, the model can be readily adapted to represent emerging technology options and evaluate their long-term value to the energy system.

As an important addition, the model takes into account process-level carbon emissions by allowing the user to add a cost penalty on emissions in both sectors. “If you have a limited emissions budget, we are able to explore the question of where to prioritize the limited emissions to get the best bang for your buck in terms of decarbonization,” says Mallapragada.

Insights from a case study

To test their model, the researchers investigated the Northeast U.S. energy system under a variety of demand, technology, and carbon price scenarios. While their major conclusions can be generalized for other regions, the Northeast proved to be a particularly interesting case study. This region has current legislation and regulatory support for renewable generation, as well as increasing emission-reduction targets, a number of which are quite stringent. It also has a high demand for energy for heating—a sector that is difficult to electrify and could particularly benefit from hydrogen and from coupling the power and hydrogen systems.

The researchers find that when combining the power and hydrogen sectors through electrolysis or hydrogen-based power generation, there is more operational flexibility to support VRE integration in the power sector and a reduced need for alternative grid-balancing supply-side resources such as battery storage or dispatchable gas generation, which in turn reduces the overall system cost. This increased VRE penetration also leads to a reduction in emissions compared to scenarios without sector-coupling. “The flexibility that electricity-based hydrogen production provides in terms of balancing the grid is as important as the hydrogen it is going to produce for decarbonizing other end uses,” says Mallapragada. They found this type of grid interaction to be more favorable than conventional hydrogen-based electricity storage, which can incur additional capital costs and efficiency losses when converting hydrogen back to power. This suggests that the role of hydrogen in the grid could be more beneficial as a source of flexible demand than as storage.

The researchers’ multi-sector modeling approach also highlighted that CCS is more cost-effective when utilized in the hydrogen supply chain, versus the power sector. They note that counter to this observation, by the end of the decade, six times more CCS projects will be deployed in the power sector than for use in hydrogen production—a fact that emphasizes the need for more cross-sectoral modeling when planning future energy systems.

In this study, the researchers tested the robustness of their conclusions against a number of factors, such as how the inclusion of non-combustion greenhouse gas emissions (including methane emissions) from natural gas used in power and hydrogen production impacts the model outcomes. They find that including the upstream emissions footprint of natural gas within the model boundary does not impact the value of sector coupling in regards to VRE integration and cost savings for decarbonization; in fact, the value actually grows because of the increased emphasis on electricity-based hydrogen production over natural gas-based pathways.

“You cannot achieve climate targets unless you take a holistic approach,” says Gençer. “This is a systems problem. There are sectors that you cannot decarbonize with electrification, and there are other sectors that you cannot decarbonize without carbon capture, and if you think about everything together, there is a synergistic solution that significantly minimizes the infrastructure costs.”