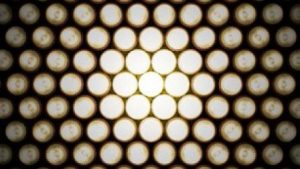 Light Emitting Diodes (LEDs) are fast becoming the most popular lighting option. Industry forecasts anticipate the market will continue to expand at an annual rate of 20% from 2011 to 2016, with the greatest growth coming in the commercial and industrial lighting sectors. As incandescent lamps have been made largely obsolete, given the U.S. government’s mandate to save energy, they have frequently been replaced by LEDs due to their long life (typically 25,000 hrs.) and the ease of adapting them to many different socket and shape requirements. However, LED lighting control presents a few problems not encountered with incandescent lamps. For example, with much less current from the LED load, normal types of triacs may be challenged in terms of latching and holding current characteristics.

Triacs make up the heart of AC light dimming controls. Triacs used in dimmers have normally been characterized and specified for incandescent lamp loads, which have high current ratings for both steady-state conditions and initial high in-rush currents, as well as very high end-of-life surge current when a filament ruptures.

Because they are diodes, LEDs have much lower steady-state current than incandescent lamps, and their initial turn-on current can be much higher for a few microseconds of each half-cycle of AC line voltage. Therefore, a spike of current can be seen at the beginning of each AC half-cycle. Figure 1 illustrates a typical spike of current. Typically, the current spike for an AC replacement lamp is 6–8 A peak; the steady-state follow current is less than 100 mA. 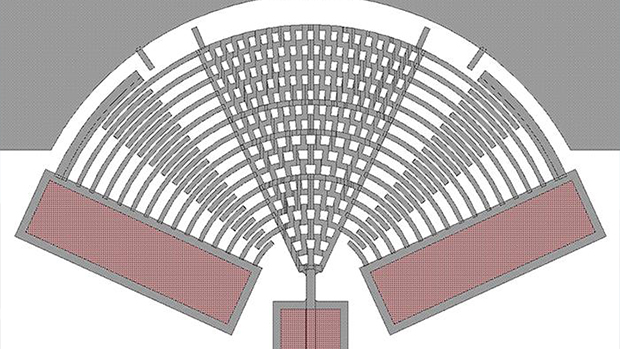 LED lamps for home lighting lamps might draw 7.5 W (A19 bulb-450 lumens) or higher, with a chandelier typically having from four to ten lamps. In contrast, a string of 50 decorative Christmas lights might draw only 4.8 W total. An LED flood lamp for a recessed ceiling fixture designed to replace a typical filament unit that produces 750 lumens consumes only 13 W (BR30) in contrast with the old filament unit, which normally draws 65 W.

Designing an AC circuit for controlling LED light output is very simple when using the new Q6008LH1LED or Q6012LH1LED Series Triacs because only a few components are required. All that is needed is a firing/triggering capacitor, a potentiometer, and a voltage breakover triggering device.

By using two inverse parallel sensitive gate silicon-controlled rectifiers (SCRs), S4X8ES1, as the voltage breakover triggering device, the controlling circuit can produce a wide range of light level outputs. Also, by using two inverse parallel sensitive gate SCRs as the triggering device, a low hysteresis control can be achieved because two SCRs form a full breakback trigger. Figure 2 illustrates a circuit diagram for such a control that might be ideal for a recessed flood lamp (for example, a BR30 LED lamp), which can be dimmed to produce a low-level light output or turned up to nearly 180° full light output. 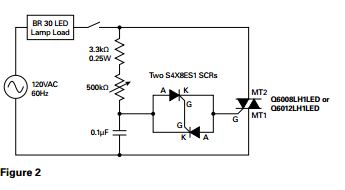 This circuit allows the lamp to turn on at nearly the full 180° on each AC half-cycle; in addition, the RC timed turn-on may be delayed to a small conduction angle on each half-cycle for very low light output. The Q60xxLH1LED Triac Series, with its low holding and latching current characteristics, allows the triac to remain on at very low current levels. Two inverse parallel sensitive gate SCRs (S4X8ES1) with their gates tied together produce a very low voltage triggering device with full breakback voltage, producing very low hysteresis. That allows the potentiometer to be set for a low conduction angle with turn-on being immediate when the line switch is turned off and on. For more information and an explanation of the hysteresis phenomenon, see Littelfuse Application Note AN1003: Phase Control Using Thyristors.

The circuit diagram in Figure 3 improves upon older phase control/dimmer circuits that provided poor hysteresis. As Figure 3 shows, with the addition of steering diodes around the C1 firing capacitor, hysteresis may be eliminated, as presented in Littelfuse Application Note AN1003. 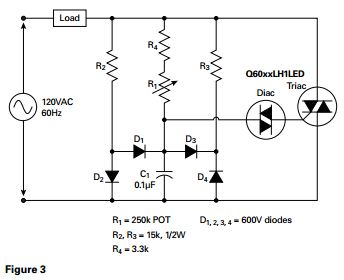 If a wide control range (full bright to very dim) and low hysteresis are not critical to the application, a simple variable light control may be designed using new Littelfuse Q6008LTH1LED or Q6012LTH1LED Series Quadrac devices. (A quadrac device is a special type of thyristor that combines a diac and a triac in a single package.) The circuit shown in Figure 4 further reduces the component count by combining the diac triggering device and an alternistor triac in a single TO- 220 isolated mounting tab package. This control circuit allows a little lower full turn-on voltage due to higher VBO switching of the diac trigger device but offers a light dimming function that operates from 175° to <90° of each AC half-cycle. 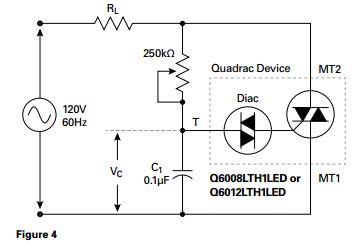 Notes: Potentiometer is 250kΩ with built-in fixed end resistance of 3kΩ minimum. The quadrac device is QxxxxLTH1LED with more sensitive triac die (low gate and holding current characteristics). RL is a minimum LED load of 10 W. VC is the same as the triggering voltage of the built-in diac die.

LED lamp loads for AC circuits may be very simple like the one shown in Figure 5 or there may be extra elements for DC refinements, such as a filtering capacitor. The presence of added elements will determine if the LED lamp load is dimmable. The simpler the LED lamp load, the more likely it is to be dimmable because filtering capacitors may increase the minimum DC current to a level that thyristor devices latch on with no varying AC current reduction below the minimum thyristor holding current.