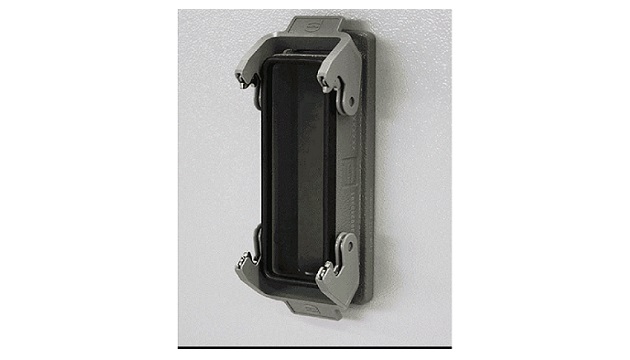 HARTING offers the metal hoods and housings for the Han B, EMV and Mseries in versions that allow the rear assembly of contact inserts. The new option simplifies the equipment of electrical cabinets with interfaces. The goal is applications in machinery and automation, robotics and traffic and energy technology.

Han industrial connectors with a metal hood or housing are especially well suited for environments requiring high levels of component robustness and the simplest possible installation. However, until now, assembly required the cable to first be fed through an opening in the control cabinet so that the inserts could be assembled outside the cabinet and then pulled back into the bulkhead mounted housing. The new Han solutions are different: They allow for prefabricated inserts to be locked in place directly in the bulkhead mounted housing – from the inside of the control cabinet.

Instead, the inserts are inserted into a plastic frame, which locks in place in the aluminum die-cast hood or housing using latches. The flange gasket of the bulkhead mounted housing is fitted entirely on the inside to ensure a seal with degree of protection IP 65/67 as well as to protect against exposure to UV radiation and ozone emissions.

Rear mounting inserts with a continuous 360° degree shielding will be available by the end of the year: with Han EMC the shield is always on the metal hood or housing. The hoods also need special EMC cable glands.

The assembly of prefabricated units becomes more efficient thanks to this new option: Control cabinets or machine modules and cable harnesses can largely be pre-assembled separately. The division of work for installations has changed: The amount of pre-assembly work has been increasing and overall the work can now be finished more cost-effectively.

The new Han connectors with the option of rear assembly are fully compatible with the previous metal housings: All inserts and modules that can be integrated into the existing standards also fit in the new bulkhead mounted housings and hoods. Machine and control cabinet developers as well as production planners can gradually introduce rear assembly into their products or productions.