Capacitors: The Store house in Electronics 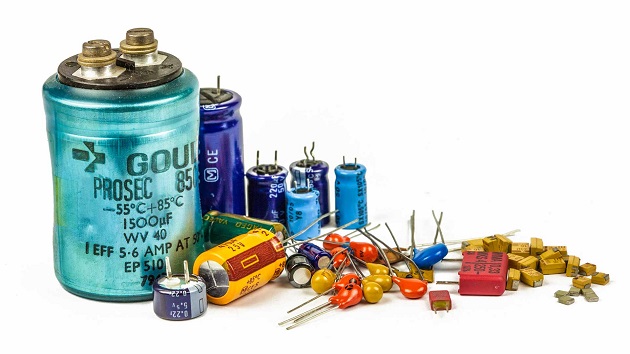 Innovation in the capacitor technology is being driven by the multiple factors like shrinking size and low height profile needs of high frequency power converters. While physical sizes of capacitor are reducing, higher ripple and load currents in the power train are also emphasizing the need for the efficiency improvements in capacitors under application stress.

With this dichotomy of needs, it has proven that it difficult to meet the dual function of low impedance and high ripple current capability within only one capacitor technology. Various types of Capacitors which are available in the market include electrolytic, ceramic, film, solid double layer, carbon, dielectric and paper & plastics.

Despite of significant demand for capacitors, India lags behinds in capacitor manufacturing due to lack of the manufacturing base for the same. Although India majorly relies on the import of numerous electronics products, equipment and components from other countries. In addition, the government’s support of allowing 100% Foreign direct investment in the electronics hardware manufacturing sector has provided an automatic route for increasing electronic component manufacturing, including electrical capacitors in the country.

The need for PCB miniaturization, advances in semiconductor and circuit architectures practically eliminated the need for capacitors larger in smart phones. Majority of capacitors on board of the current smart phones are based on Multilayer Ceramic Capacitors class I or class II technology due to its downsizing capabilities.With 5G on the horizon, more capacitors will be needed and fitting hundreds of them means capacitor efficiency needs to increase. powder of the sheets that make up the Multilayer ceramic chip capacitor (MLCC) to allow sheets to be stacked much more efficiently.

Commercial space projects for telecom satellites, broad internet access or space transport missions are representing more than 50% of space business today with the help of capacitors. This transition brings a high motivation for faster adoption of the latest technology into the space hardware and shortening of evaluation & qualification phase for new technologies. Radiation hardness is the key issue to be addressed on active components, while requirements for lead termination soldering is the main barrier to adopt available commercial/automotive grade passive components.

Automotive industry is one of the most targeted application among the passive component development. The basic segmentation is cabin electronics, engine compartment. In the automotive and on-board automotive-related areas, the performance of equipment such as advanced driver assistance systems is progressing together with the advancement of space-saving mounting parts to ensure comfortable vehicle interiors. To this end, even individual passive components must conform to harsh environments, miniaturization and high-performance requirements.

Industrial electronics is a wide area of applications from a standard operation environment to the most demanding requirements for reliable components operations. The key passive component trends are downsizing, enabled by use of “super-materials” or “super-technology”, parameters range extension or reinforcement of robustness and life at harsh conditions. The recent releases include ruggedized, high energy storage super capacitors with record storage energy densities, but also a development of new dielectric types for direct ~1kV voltage.

Capacitors have an important role in medical systems and are part of diagnostic, imaging, patient monitoring, and pharmaceutical delivery and dispensing applications. In particular, implantable medical electronic devices are usually powered by batteries or capacitors that have to be removed from the body after completing their function due to their non biodegradable properties. Capacitors are employed for use in implantable medical devices such as defibrillators, insulin pumps and pacemakers, as well as in portable and wearable devices . MLCCs are attractive for medical devices because they are usually compact in size, offer high reliability and large capacity, and have predictable temperature coefficients.

The Market is large and vivid

Capacitor industry has seen almost a complete change in dielectrics, electrodes, and impregnates. The dielectric has changed from paper to poly-propylene film, the electrode from plain foil to metalized film, metalized papers, or embossed foils, and the fluids have changed from polychlorinated biphenyls to those based on hydrocarbon or phthalate ester chemistry.

The new high voltage capacitor market also emphasizes vendor strategies in regards to product differentiation through R&D. Vendors are making concentrated efforts to provide superior-quality and highly customized products aimed to fulfilling specific customer requirements. Capacitors are used in virtually every electronic device for everything from decoupling to filtering, to power smoothing. Today, capacitors are able to provide relatively high levels of capacitance within components that occupy a small volume. Some recent designs using nanotechnology to increase capacitor storage show potential for the capacitor to replace the batteries in electric cars.

Consumer market is the largest among the electronic applications with continuous growth, on the other hands, the “traditional” segments such as smart phones, digital cameras, PC computers, notebooks, tablets etc are beyond its mature stage with decline in sold pieces. The highest market dynamic is currently seen on automotive electronics and telecommunication/ networking infrastructure, that are now on top of the radar screen of number of passive component manufacturers. Passive component makers are also more and more concentrating on development of a complete module solutions rather than development of individual components. Capacitors are one of the critical components needed for any electronic hardware designs. We are living in a challenging time with several end market changes and new technology developments on both component and end application sides.

New Products in the market

This Capacitors (AO-CAPs) are solid-state aluminum capacitors with a conductive organic polymer cathode. This conductive organic polymer results in very low equivalent series resistance (ESR) and improved capacitance retention at a high frequency. KEMET A720 AO-CAPs can operate at steady voltages up to 100% of rated voltage without the need to de-rate. A720’s lack of liquid electrolyte allows for long operational lifetimes and high operational temperatures.

United Chemi-Con KHF Miniature Aluminum Electrolytic Capacitors (AECs) are radial-leaded and offer 3000 hours at +105°C endurance with ripple current. UCC KHF AECs feature a rated voltage range from 400VDC to 450VDC and a 33μF to 150μF capacitance range. The series is designed for use in low-profile power supplies.

Vishay / BC Components 257 PHM-SI Miniature Snap-In Power Ripple Capacitors have a 5000h life at 85ºC and are available up to 500V. The series has a rated capacitance range of 56μF to 3300μF with a tolerance of ±20%. 257 PHM-SI applications include general purpose, industrial and audio/video systems, smoothing and filtering, and standard and switched mode power supplies.

The path ahead is challenging

Miniaturisation, high speed data communication, increase of computing power, energy generation, transmission and storage are the main drivers for next generation of electronics. These requirements may induce some dramatic market changes challenging the passive components development & selection guide. It may require some parameter improvements such as increase of operating temperature, vibration & harsh environment resistance, lower ESR, lower ESL etc that is achievable only by replacement of capacitor technology used at the application for decades.

The current and future capacitor challenges are related to its core function – energy storage. Generation, recuperation, transportation, transmission and storage of energy from nano-scale up to high power storage networks are among the key topics for today’s electronic and even human society evolution from wearable energy harvesters, through electric vehicles to handling of energy generated by renewable sources.