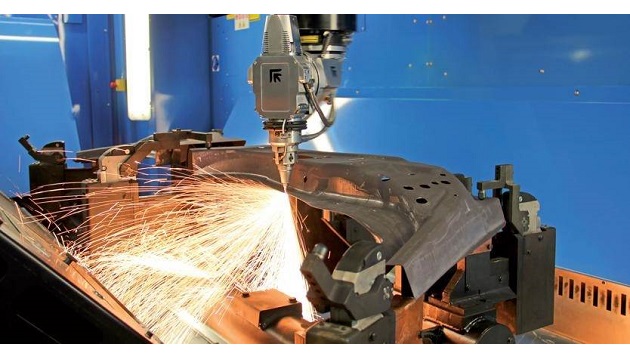 European scientists are developing a new ‘pulsed’ laser system, similar to the 2018 Nobel Prize in Physics winner, to cut and shape ultra-high-strength industrial materials that are notoriously difficult to process at unimaginable speeds, while producing considerably less waste.

Operating at 1.5 kilometres per second, the new laser will be powerful enough to cut the hardest boron steel used in car construction at one cubic centimetre per minute – over a thousand times faster than existing technology that currently ablates steel at one cubic millimetre per minute.

Exerting an average power of 2.5kW, or 100kW in a single pulse, and with repetition rates up to 1GHz (or 1 billion cycles per second – a thousand times more than the current 1MHz upper limit), the laser will have the control and refinement to etch moulds for vehicle parts at micron-scale accuracy as well as micro-weld dissimilar metals for solar thermal absorbers.

Commonly used in laser eye surgery, pulsed lasers send out short blasts of energy, or ‘pulses’, in tiny fractions of a second. The pulses in this new laser are so fast that their duration is measured in femtoseconds – a femtosecond compared to a second is in the same ratio as one second to 32 million years.

Aiming to improve car manufacturing speed and efficiency, while reducing the potential production costs and environmental impact, the new pulse laser system has received a €5 million development grant from the European Commission.

Boron steel, which is used in car bodies because of its super strength, is so durable that it is often difficult to cut or shape. The processes used to ensure its durability usually remove many of the steel’s fundamental properties, such as the workability.

Although boron steel can be cut with a plasma arc torch, (a tool that cuts using high pressure, accelerated jet of hot plasma ), this can instantly heat the metal to over 650ºC (1,200ºF) and is not as precise or as quick as a pulse laser.

Going by the acronym ‘PULSE’, the consortium behind the powerful new laser draws on expertise from eleven research institutions and industry partners from six different European countries and is coordinated by Tampere University in Finland.

“While ultrashort-pulse laser (USPL) technology has been around for decades, breakthroughs have meant it has become something of a buzzword, being awarded the latest Nobel Prize for physics, and increasingly being deployed in industrial production.”

“Laser technology exists today that can cut boron steel, but it is far too slow for any large scale production”.

The new system looks to have a positive environmental impact by being so efficient that waste products will be reduced.

“PULSE is committed to improving manufacturing, but also reducing the impact on the environment, therefore we can confirm that a 10% reduction in waste products is certainly achievable”, Dr Gumenyuk said.

The laser system will enable an improved digital design to lighten vehicle chassis weight with benefits to fuel economy and increase the range of electric vehicles.

The consortium expects a prototype to be ready by 2021.