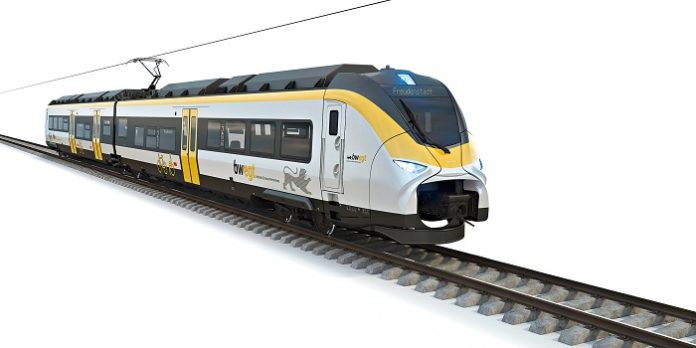 A small team of researchers from Lawrence Berkeley National Laboratory and the University of California has found that battery-powered trains could become economical as soon as 2023, the group argues that improved battery technology and cheap, renewable energy could soon allow battery power to compete with diesel fuel to power trains. Federico Zenith with NTNU, Trondheim, has published a News & Views piece in the same journal issue outlining the reasons for converting trains to battery power and gives an overview of the work done by the team on this new effort.

Trains, as Zenith notes, haul approximately 40 percent of intercity freight in the U.S., and sending things by train is cheaper than using trucks. Most of the freight trains in the U.S. run on diesel fuel, he states, spewing approximately 0.6 percent of total U.S. carbon emissions. In this new effort, the researchers suggest that switching to battery power could prevent these emissions.

Electric trains in the U.S. get their power from overhead lines—a system that is expensive and inefficient. The team suggests that batteries could provide a better option; more specifically, they claim that a single locomotive equipped with a 14-megawatt battery system would be sufficient to replace a train powered by a diesel engine. They further claim that such a locomotive could carry a train approximately 240 kilometers on a single charge. This would consume half the energy of a diesel-powered train. And if the battery is charged using a renewable resource, it would reduce the carbon footprint of an electric train to zero.

The researchers note that most current diesel locomotives actually run on electricity—the diesel is used to power onboard generators. Thus, all that would be needed for most locomotives would be to replace the generators and add a dedicated boxcar just behind the locomotive to carry a large battery. Adding more dedicated boxcars with batteries would increase the range of the train. The batteries, they further note, could be charged at designated stops, provided fast-chargers for such large batteries are developed. As an alternative, battery-carrying boxcars could be swapped out for fresh ones at designated stops, dramatically reducing wait times. The researchers acknowledge that at least for the near future, operating costs would be somewhat higher for battery-powered trains, but they suggest the environmental improvements would make it worth it.