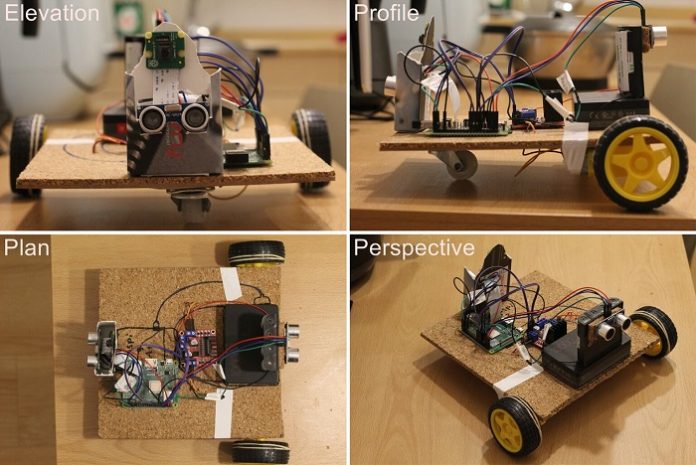 Researchers at Universitat Politecnica de Catalunya in Barcelona have recently developed Baby Robot, a robotic toy that could be used to enhance the motor skills of toddlers. This system can interact with toddlers in ways that encourage them to move around, either to try grasping the robot or to run away from it.

“Our study first emerged as a university project,” Alba M. G. García and Eric Cañas, the two master’s students who carried out the study. “We were living together while completing an MSc in artificial intelligence in Barcelona. One of the subjects we were taking, called “Cognitive Interaction with Robots,” and delivered by our lecturers Anaís Garrell and Cecilio Angulo, gave us the perfect opportunity to have a bit of fun during COVID-19 lockdown measures.”

The main objective of the recent study conducted by García and Cañas was to develop a system that could enhance classical ‘crawling toys,” toys that many toddlers and babies play with while they are still crawling or as they are learning to walk. The researchers wanted to make crawling toys more interactive and entertaining, by giving them the ability to react to a toddler’s behavior, instead of just having them randomly repeat a set of predefined movements.

Baby Robot is essentially a car-like toy with a small camera and some sensors integrated into it. The robot’s movements are planned by a series of computer vision algorithms that can detect a toddler, calculate a robot’s relative position to it, and plan movements that will increase a toddler’s levels of engagement with the toy, while also avoiding collisions with other objects.

“With the information collected by the robot, the algorithms compute the current state of the play session and how the robot should behave to motivate the baby to chase it (i.e., coming closer, escaping, demanding its attention, etc.),” García and Cañas said. “Meanwhile, the robot can connect to an external device (such as a PC or a smartphone), not only for delegating some computations if needed but also to stream the play session or even record it.”

Baby Robot has numerous advantages over existing crawling toys. The most noteworthy is that it is based on computer vision techniques that allow it to respond to a toddler’s movements instead of performing random movements that are unrelated to a toddler’s behavior. As a result, the robot allows toddlers to experiment more as they play, while also encouraging them to practice their motor skills.

García and Cañas evaluated their robot in a real-world environment, comparing how a group of toddlers in kindergarten interreacted with it to how they played with conventional toy cars. This experiment was organized by their lecturer, Garrell, who reached out to a pedagoue and arranged for them to visit a kindergarten to conduct their evaluation.

Interestingly, they found that the toddlers played with Baby Robot longer than they played with the conventional crawling toys. In addition, the robotic toy appeared to enhance the children’s mobility skills over time.

“During our experiments, we observed that the engagement of the babies that were playing with the Baby Robot toy substitute significantly increased, leading them to be in movement 3.1 times longer and to travel 4.4 times more meters than those in the control condition,” García and Cañas said. “This finding opens an interesting line of research about how crawling toys could process the baby’s feedback and motivate them to have longer and more efficient crawling sessions, as well as how computer vision can help to achieve this.”

So far, Baby Robot has proved to be a very promising toy for increasing the motor skills of toddlers. The researchers are thus considering whether to approach toy manufacturers who could make the system they developed accessible to the public.

“We have thought several times about associating with a toy manufacturer, but we have not taken the first step yet,” García and Cañas said. “Getting support from a toy market expert would allow us not only to transform our prototype into something that babies could actually play with, a resistant and approved toy, but also to develop more solid studies about how our robot improves a baby’s crawling sessions.”

One of the reasons why García and Cañas have not yet approached a toy manufacturer is that their current prototype was built using very cheap components. As a result, it might not yet be ready to be presented to potential investors.

“We broke by accident a 60€ board while experimenting, since then, we decided to prototype it with the cheapest components we could find,” García and Cañas said. “We thus ended up using lightweight and accessible products -without cost optimization, the total cost of the hardware does not surpass 70€-, but being able to experiment with more powerful boards or more luminous cameras would really improve the experience.”

As the robot is designed for toddlers, the researchers are also weary of the fact that is should be safe for children. Before the toy is commercialized, it would thus need to undergo a series of tests, which they are not currently able to fund.

“You cannot give to a toddler a toy that is full of visible wires that could end in its stomach,” García and Cañas said. “For this reason, in our experiments, we have managed to simulate its behavior using other remotely controlled toys that were already approved for babies. However, the most appropriate experimentation would require an expert manufacturer to build a resistant case that would let infants play directly with Baby Robot, rather than a surrogate version of it.”

In the future, García and Cañas would like to find investors interested in supporting their efforts to develop a whole line of computer vision-powered toys. These would include robots for children at other stages of development, such older infants and primary school students.

In addition, the researchers hope to carry out new pedagogic studies that could help to fine-tune their toy’s behavior. Baby Robot’s design allows it to produce lights, colors, sounds and cute facial expressions presented on a small screen. While these interactive elements can enhance a toddler’s experience while playing with the toy, the team did not implement them in their prototype yet, as they preferred to specifically investigate the effects of its reactivity to the toddler on the resulting playtime.

“In future studies, we would like to progressively include the rest of the stimuli in order to observe how each one of them affect the baby engagement separately,” García and Cañas said. “Nevertheless, to be really conclusive, these further studies would require the inclusion of a toy manufacturer that could build a safe case for the toy, in order to directly experiment with it instead of surrogates.”