ASM introduces the new generation of the SIPLACE SX 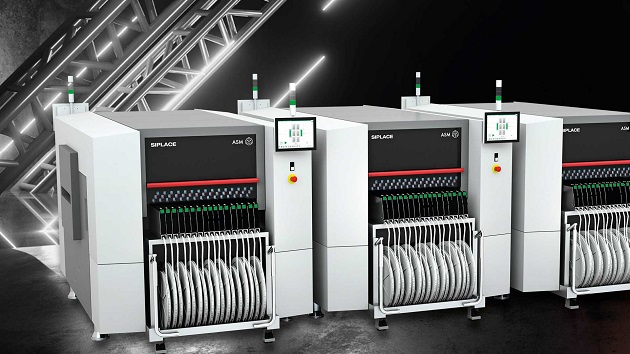 New placement head versions, a more powerful vision system, open interfaces for special feeders and many new software functions are the improvements that set the latest version of the SIPLACE SX placement platform apart. The SIPLACE SpeedStar CP20 raises the placement performance to up to 43,250 components per hour with even more accuracy and an expanded component spectrum. And the two other placement head options, the SIPLACE MultiStar and the SIPLACE TwinStar, can handle larger and more complex components and place them with a force of up to 100 newtons. The blue light of the new camera system delivers extremely contrasty images and allows for more component-specific illumination settings and multiple exposures from which 3D images can be computed for improved process control. Other innovations include the OSC Package for odd-shaped components and the Passive Clinching Tool for THT processes. A multi-touch monitor and many smart support functions make the machine’s operation easier and more intuitive.

“With its interchangeable gantries and its unique capacity-on-demand, the SIPLACE SX has set the standard for flexible electronics production since it first hit the market. With the new SIPLACE SpeedStar, our developers have achieved something that is truly unique. The placement head is not only much faster, but also more accurate, all while accommodating an even greater component spectrum,” explains Alexander Hagenfeldt, Head of Product Marketing at technology leader ASM Assembly Systems. “The new SIPLACE SX is THT-capable and features a clinching option. To take full advantage of the SIPLACE SX’s flexibility for OSCs and special components, the Open Third-Party Feeder Interface makes it possible to integrate special third-party feeders quickly and easily.”

In concrete terms, the new SIPLACE SpeedStar features up to 17 percent more placement performance, 12 percent more accuracy, and a component spectrum that is 37 percent greater. These and other improvements made to the SIPLACE MultiStar and SIPLACE TwinStar heads deliver more yield, productivity and efficiency in flexible electronics production.

The current SIPLACE SX is already able to handle a huge spectrum of regular and odd-shaped components. The latest version is now capable of placing components that are up to 50 mm tall and weighing up to 240 grams with forces of up to 100 newtons. This opens up an entirely new set of possibilities on SMT lines, even extending to THT processes which the SIPLACE SX now supports with a Passive Clinching Tool and an additional inspection step after the placement process.

The new vision system with its component-specific settings guarantees optimal process control. On unusually large and complex components, the machine can check the condition of pins and other characteristics in addition to the component’s shape and size by turning multiple images into 3D pictures and inspecting user-defined features on all of its sides.

Even the feeders are more flexible because the Open Third-Party Feeder Interface makes it easy for third-party manufacturers or others to integrate special feeders. And the SIPLACE PowerConnector X supplements other SIPLACE options like the SIPLACE GlueFeeder X and the SIPLACE MeasuringFeeder X on the changeover table.

A multi-touch monitor, new smart automatic functions in the software, a new closing system for the cover, new interface for predictive maintenance and many other software improvements simplify and accelerate the operation of the new SIPLACE SX.