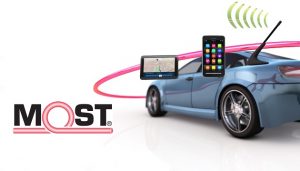 Microchip Technology Inc. on 27 July, announced that the company has delivered its 50 millionth Media Oriented System Transport (MOST) technology 50 Mbps Intelligent Network Interface Controller (INIC). Microchip’s MOST50 technology, which includes an electrical Physical Layer (ePHY) that is optimised for use with unshielded twisted pair (UTP) copper wire, has been implemented in multiple vehicle platforms, from compact cars to luxury SUVs, and is currently being used by major car manufacturers including General Motors and Toyota.

MOST technology is a proven, well-defined and widely-used networking solution for high-bandwidth in-vehicle infotainment systems. MOST technology provides a predictable and efficient transport for audio, video, packet and control data without the need for burdensome time-synchronisation protocols. For audio and video data the Microchip INIC provides a direct connection between the infotainment network and the modules application hardware interfaces to minimise processor overhead, simplify data communication and support remote controlled processor-less applications.

“Reaching the 50 million unit milestone is a significant accomplishment for MOST50 technology and a testament to the continued global acceptance and use of MOST networking technology,” said Dan Termer, vice president of Microchip’s Automotive Information Systems division. “We will continue to work with major car manufactures globally to implement MOST technology.”

The MOST Cooperation standard enables automotive OEMs and their Tier 1 Suppliers to develop infotainment systems with a proven and well-supported methodology for system management and control with superior reliability and a high Quality of Service (QoS). MOST technology has been implemented in 220 production vehicles globally and is being adopted by all major automotive Original Equipment Manufacturers (OEMs).

To learn more about Microchip’s MOST products, visit http://www.microchip.com/design-centers/automotive/most/products