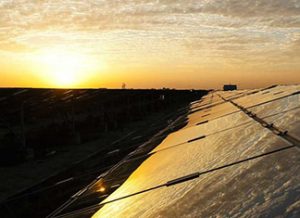 The world’s largest solar power plant at a single location is online in southern India. With a capacity of 648 megawatts (MW), the facility is made up of 2.5 million photovoltaic solar modules spread over 10 km2 (3.9 mi2), and marks a step forward for the Indian government’s ambitious renewable energy goals.

Situated at Kamuthi in the southern Indian state of Tamil Nadu, the plant was constructed in eight months for a cost of about Rs4,500 crore (US$662 million). Its capacity tops the previous record of 550 MW held in a tie between two facilities in California, the Topaz Solar Farm and the Desert Sunlight Solar Farm.

The new plant brings the Indian government a little closer to the renewable energy goals it has set out for the country, on both a national and state level. The National Solar Mission was originally put forward a target of 20 gigawatts (GW) of power from solar by 2022, but in 2015 that goal was increased to 100 GW. In 2012, the state of Tamil Nadu set out its own plans to contribute 3,000 MW – although it has since missed its original target date of 2015.

With the new facility, India is poised to become the third-largest solar market in the world in 2017, following only China and the US.