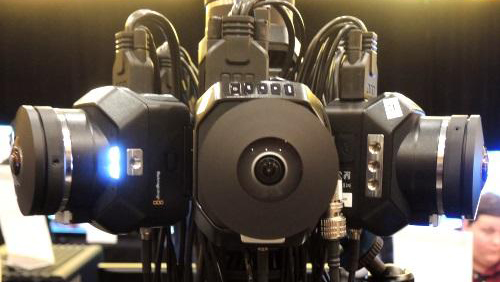 You may not have to leave your couch for your next summer vacation. Multiple companies are working to enable real-time 360-degree video services over virtual reality headsets.

Advanced Micro Devices is working with three companies who aim to deliver remote travel services as early as this summer. The elements for such services are just starting to come together.

As many as 40 companies now offer 360-degree cameras or camera rigs, said Mike Schmit, a director of software engineering at AMD. Another dozen companies are developing VR headsets, some of them targeting specialty markets such as arcades, he said.

In between, AMD and others are enabling the real-time stitching and encoding software such services need. AMD’s demo included a high-end PC configured to handle the stitching and a separate system driving an HTC Vive headset for viewing it.

At a company event here, AMD demonstrated real-time video-stitching software it is making open source for 360-degree video at 4K resolution. Ultimately the company aims to write code that can handle 16K resolution over the 360-degree field that users could view in 4K segments.

The demo supported 8-bit color and graphics overlays, using a rig of seven cameras AMD created. The next version will support 10-bit color.

While most people think of computer games as the main application for VR, some surveys showed users are more interested in several other applications including remote travel, said Schmit. “VR may not turn out to be what we think it should be,” he added.