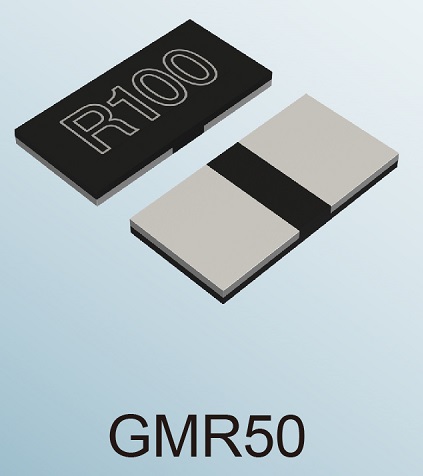 This new series combines a revised electrode structure with optimized device design that improves heat dissipation to PCB where the resistor is mounted on. The result is a 39% smaller mounting area over conventional 4W rated products. In addition, this new series can sustain against overcurrent loads and deliver stable current detection accuracy even when unexpected loads exceeding the rated power are applied, contributing to improve reliability in system level.

Shunt resistors are widely used in the automotive and industrial markets for current detection. In the automotive sector in particular, increasing functionality are resulting in a greater number of motors and ECUs, but at the same time the mounting area for applications are inherently limited. As a result, high density mounting is increasing, spurring demand for components including compact, power shunt resistors.

To meet these needs, in 2017 ROHM released the GMR100 series. This is power shunt resistors in the 6.4mm×3.2mm (2512 type package) size, which has since been well received in the automotive and industrial equipment markets demanding strict temperature requirements. The GMR50 series introduced this time was developed to meet the demand for further miniaturization and higher power than conventional products. In addition to expanding lineup of shunt resistors, as a comprehensive semiconductor manufacturer, ROHM will continue to strengthen its technical support such as thermal simulations helping automotive and industrial customers and offer unique solutions together with power devices and op amps which is currently being developed. 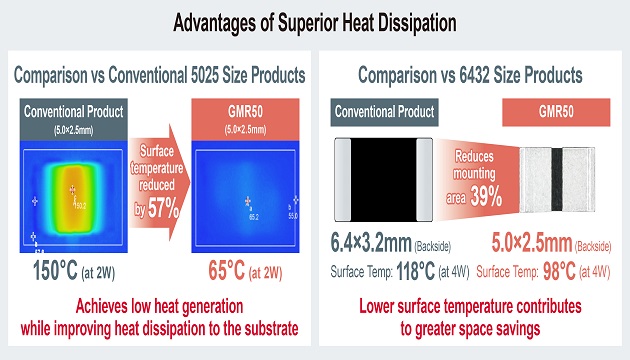 To increase rated power while reducing size, it is necessary to ensure long-term reliability against self-heating. In response, ROHM improved heat dissipation by revising the electrode structure and optimizing device design. For example, when using a 5mΩ product at 2W, ROHM succeeded in reducing surface temperature rise by 57% compared with conventional 5025 size resistors. 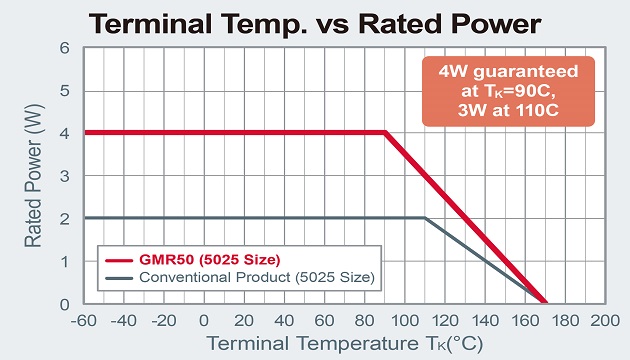 The GMR50 series delivers superior heat dissipation, guaranteeing the industry’s highest rated power (4W) in the 5.0mm×2.5mm (2010 type package)_size at a terminal temperature of TK=90°C (and 3W at TK=110°C).Improving rated power makes it possible to use shunt resistors one size smaller in the 4W class, reducing mounting area by 39% and contributing to greater space savings. 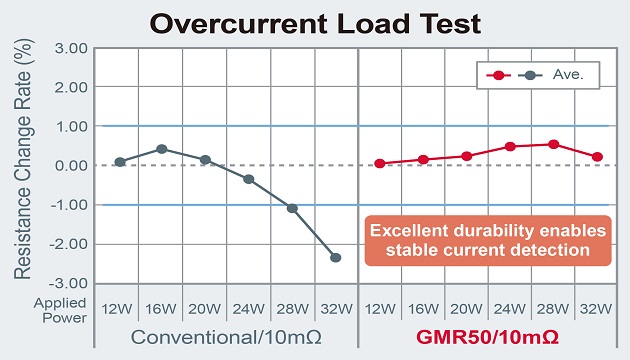 3) ROHM can provide unique solutions (as a comprehensive semiconductor manufacturer)

In addition to shunt resistors, ROHM can provide a broad portfolio ranging from ICs to power devices as well as advanced technical support such as thermal simulation. For example, with the newly developed GMR50 series mounted on PCB, it is possible to simulate surface temperature rise in comparison with ROHM’s conventional products. The simulation result suggests that it is able to suppress temperature rise over circuits that use two conventional 5025 size resistors in parallel, even when mounting just one unit.

Excellent temperature coefficient of resistance even in the low resistance region

This new series utilizes a high performance metal alloy as the resistive element to provide superior Temperature Coefficient of Resistance (TCR) even in the low resistance region. As an example, 0 to +25ppm/°C is ensured for 5mΩ resistance. This enables high accuracy current detection that is less affected by changes in ambient temperature, contributing to improved application reliability. 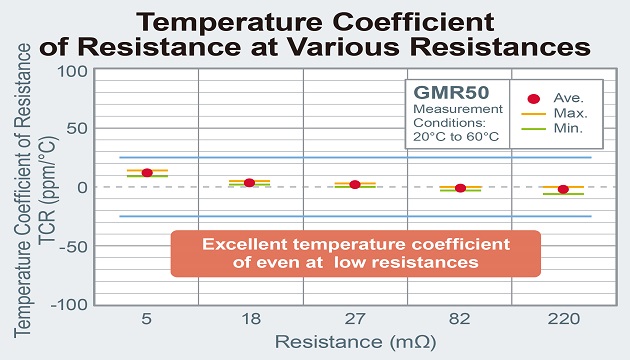 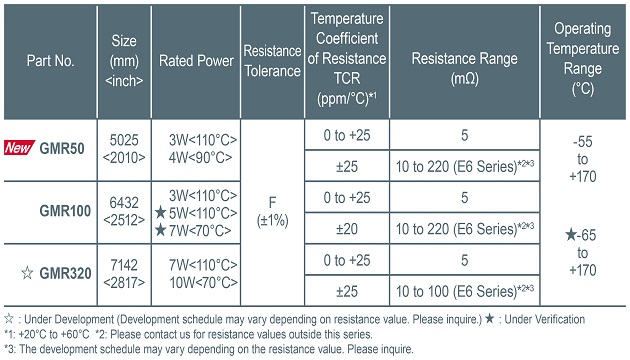 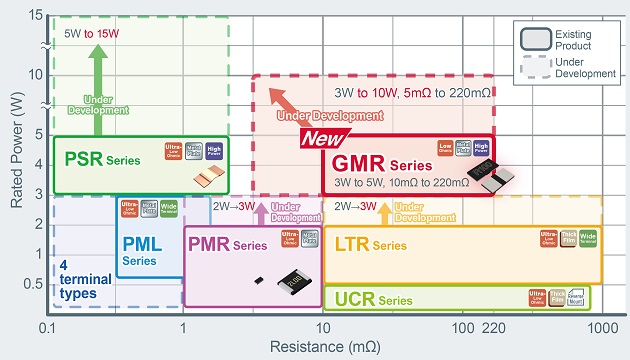