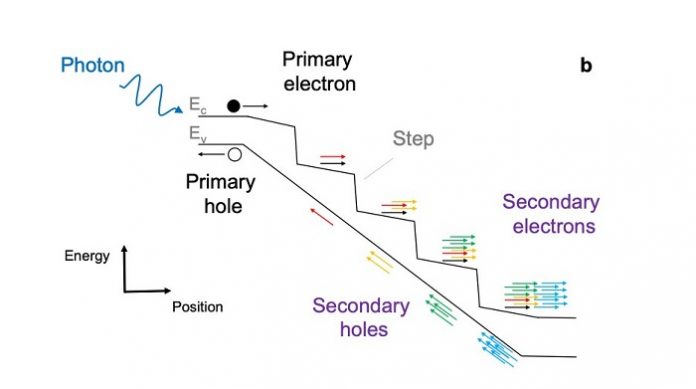 Realizing the potential of self-driving cars hinges on technology that can quickly sense and react to obstacles and other vehicles in real-time. Engineers from The University of Texas at Austin and the University of Virginia created a new first-of-its-kind light detecting device that can more accurately amplify weak signals bouncing off of faraway objects than current technology allows, giving autonomous vehicles a fuller picture of what’s happening on the road.

The new device is more sensitive than other light detectors in that it also eliminates inconsistency, or noise, associated with the detection process. Such noise can cause systems to miss signals and put autonomous vehicle passengers at risk.

“Autonomous vehicles send out laser signals that bounce off objects to tell you how far away you are. Not much light comes back, so if your detector is putting out more noise than the signal coming in you get nothing.

Researchers around the globe are working on devices, known as avalanche photodiodes, to meet these needs. But what makes this new device stand out is its staircase-like alignment. It includes physical steps in energy that electrons roll down, multiplying along the way and creating a stronger electrical current for light detection as they go.

“The electron is like a marble rolling down a flight of stairs,” said Seth Bank, professor in the Cockrell School’s Department of Electrical and Computer Engineering who led the research with Campbell, a former professor in the Cockrell School from 1989 to 2006 and UT Austin alumnus (B.S., Physics, 1969). “Each time the marble rolls off a step, it drops and crashes into the next one. In our case, the electron does the same thing, but each collision releases enough energy to actually free another electron. We may start with one electron, but falling off each step doubles the number of electrons: 1, 2, 4, 8, and so on.”

The new pixel-sized device is ideal for Light Detection and Ranging (lidar) receivers, which require high-resolution sensors that detect optical signals reflected from distant objects. Lidar is an important part of self-driving car technology, and it also has applications in robotics, surveillance, and terrain mapping.

Adding steps increases the sensitivity and consistency of the device. And the consistent multiplication of electrons with each step makes the electrical signals from the detector more dependable, even in low light conditions.

“The less random the multiplication is, the weaker the signals you can pick out from the background,” said Bank. “For example, that could allow you to look out to greater distances with a laser radar system for autonomous vehicles.”

This type of sensing capability has existed for decades, but technological barriers held back its advancement. Photomultiplier tubes long represented the “holy grail” of this form of sensing, Bank said, but that technology has been around for more than 50 years and uses outdated lighting components and vacuum tubes. In the 1980s, inventor Federico Capasso first conceived of the avalanche photodiode technology the researchers have been studying. But the tools and techniques to make it a reality just weren’t far enough along.

The science behind this breakthrough comes in a new way of growing materials, Bank said. Instead of growing materials with randomly distributed atoms, they created layered alloys composed of binary compounds—those made up of two elements—stacked on top of each other.

“What this allows is to change the electron’s energy landscape in a very simple way to create the structure that Capasso envisioned in the early 80s, but unfortunately there just wasn’t the ability to synthesize crystals that had all the requisite properties,” Bank said.

Another important piece of this device is that it can operate at room temperature. Today, the most sensitive light detectors need to be kept at temperatures hundreds of degrees below zero, making them too expensive and impractical for applications such as lidar.

The research was funded by the U.S. Army Research Office (ARO) and The Defense Advanced Research Projects Agency (DARPA). The researchers have funding through ARO and DARPA to continue refining their process to add even more steps to the devices. And they are working with a semiconductor company to commercialize the technology.

The engineers also plan to marry their multi-step staircase device with an avalanche photodiode they built last year that is sensitive to near-infrared light, which opens up new applications such as fiber-optic communications and thermal imaging.

“This should give us the best of both worlds: response to a wider range of colors and greater sensitivity to weak signals because of the lower noise amplification that comes naturally from the staircase architecture,” Bank said.