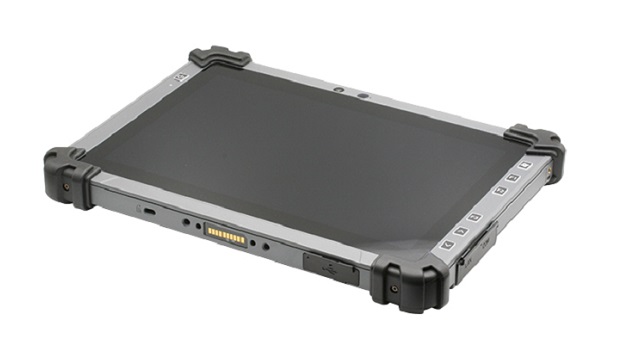 AAEON, a major developer of advanced industrial solutions, launches the RTC-1010, a 10.1” rugged tablet computer with an extensive IO interface and a series of user-friendly hardware features.

The robust new AAEON tablet features an LCD bonded with a scratch-resistant projected capacitive multi-touch screen. It has an operating temperature range of -20oC to 50oC, is IP65 compliant, can withstand drops from a height of 122cm, and meets MIL-STD-810G standards, so strong resistance to vibrations is guaranteed.

The device is powered by an Intel Pentium/Celeron processor and supports both Windows 10 IoT and Android 8.1 operating systems. It has onboard 4GB DDR3L memory and 64GB eMMC storage, and an additional 512GB of mSATA storage can be added via an internal Mini Card slot.

The tablet features a 2MP front camera and 8MP rear camera with flash. It has 2D barcode, smart card, and NFC readers, and it can be customized to include a magnetic stripe reader. Multiple USB3.0 and USB2.0 ports along with micro HDMI, COM and LAN ports enable greater functionality and connections to peripherals devices.

The RTC-1010 comes with inbuilt WiFi and Bluetooth, and a 4G LTE module can be added via a second Mini Card slot. The system’s wireless capabilities also include GPS, Beidou, or alternative navigation solutions.

To maximize ease of use, the tablet is fitted with a hot-swappable battery, and AAEON has also developed a series of accessories including hand and shoulder straps, a docking station, and a charging dock.

Speaking about the new device, AAEON Rugged Mobile Division product manager Peter Yang said: “The RTC-1010’s rugged specifications, flexibility, and usability will make it an indispensable tool for the military, tough factory automation applications, and people who spend their working days out in the field.”