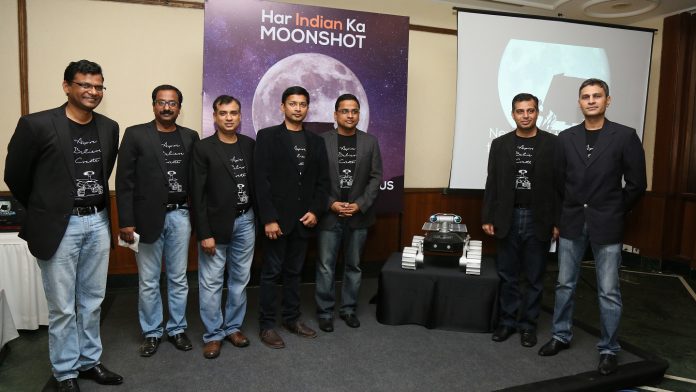 TeamIndus, a space technology enterprise, is pleased to announce a verified commercial launch contract with the Indian Space Research Organisation (ISRO) for its historic Mission to land a Spacecraft on the Moon as part of its bid to win the Google Lunar XPRIZE.

TeamIndus is the only Indian team competing for the Google Lunar XPRIZE. The goal of the unprecedented $30 million Google Lunar XPRIZE is to ignite a new era of space exploration by lowering the cost and inspiring the imagination of the next generation. To win the prize, privately funded teams must land their spacecraft on the surface of the Moon, travel 500 meters, and broadcast high definition video, images, and data back to Earth.

In late 2017, seven years after a group of Indian entrepreneurs with no aerospace experience signed up to make an impossible dream come true, TeamIndus will launch its Spacecraft bound for the Moon aboard the Polar Satellite Launch Vehicle (PSLV).

This agreement reaffirms TeamIndus’ credentials to take the Indian Tricolour to the Moon and set path on potentially becoming the first private entity in the world to soft-land on the lunar surface, a feat previously accomplished by the USSR, United States and China.

Announcing the launch contract, Rahul Narayan, TeamIndus’ Fleet Commander, said, “What gave us confidence to dream big when we started on this journey many years back was the heft of the scientific legacy that India, with ISRO, created over decades. This launch contract reaffirms our mission as a truly Indian mission where the best of India’s public and private enterprises have come together to realise a common dream.”

Narayan added the mission will help India join an exclusive club of nations with proven technology to soft-land on the Moon, thereby opening newer avenues of space exploration for the benefit of all humankind. “Programs like these are a testimony to the Indian Government’s Make in India initiative in the increasingly competitive world of New Space companies,” he added.

“We are delighted to officially verify TeamIndus’ launch contract,” said Chanda Gonzales-Mowrer, senior director, Google Lunar XPRIZE. “This is a notable achievement for TeamIndus and we are proud to have one more team make it into the final stretch of this competition.”

A.S. Kiran Kumar, Chairman, ISRO had earlier said, “If you treat space as the new frontier, then who better than the next generation of people who bring in new innovative approaches. We want to see there is enough capacity to make use of the knowledge in India for the world market.”

XPRIZE is an innovation engine, a facilitator of exponential change and a catalyst for the benefit of humanity. TeamIndus’ Moon mission takes its character from this ideal and is driven by its inclusive nature, providing opportunities for students to fly experiments to the Moon, mechanisms for supporters to get a ringside view of the engineering as well as for brands to enable and partner this historic journey.

Nandan Nilekani, TeamIndus investor, Infosys co-founder and former Chairman of the Unique Identification Authority of India (UIDAI) said, “India is at the cusp of dramatic change. We are ready to take to the global stage in demonstrating a capability for building deep technology and competing with the best in the world. I invested in TeamIndus because they’re the face of New India, and I believe they will inspire the next generation of innovators and achievers.”

One of the earliest supporters of TeamIndus, Rajiv Mody, Chairman, Sasken Communications said, “TeamIndus is about the free unencumbered spirit of motivated teams. Not participating was not an option for Sasken and me personally. TeamIndus is going to re-define what was thought possible out of India.”

The TeamIndus Spacecraft has been designed and developed in Bangalore by a 100-person engineering team including 20 retired ISRO scientists. In a launch window starting on the 28th of December, 2017, the PSLV will inject the spacecraft into an orbit 880 km x 70,000 km around the Earth. The Spacecraft will then undertake a 21day journey to soft land in Mare Imbrium, a region in the North-Western hemisphere of the Moon.

After landing in Mare Imbrium, the Spacecraft will deploy all its payload including the TeamIndus Rover that will traverse 500 meters on the Moon’s surface in order to accomplish its Google Lunar XPRIZE objectives.