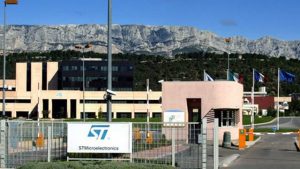 “In the third quarter we achieved a number of important milestones: quarterly revenues exceeded $2.1 billion, up almost 19% year-over-year; gross margin was 39.5% and operating margin before impairment and restructuring was 13.7%,” said Carlo Bozotti, STMicroelectronics President & CEO.

“All product groups recorded double-digit year-over-year revenue growth, driven by strong demand across all geographies in our focus application areas of Internet of Things, Smartphones, Industrial and Smart Driving.

“ST’s transformation, focused on sustainable revenue growth across our entire portfolio, is taking shape, driven by our technologies, products, people and diversified customer base. We are determined to continue on this growth and innovation trajectory, underpinned by a solid financial position and enhanced liquidity.”

Third quarter net revenues increased 11.1% sequentially, a better than seasonal performance and 210 basis points higher than the mid-point of the Company’s guidance. On a sequential basis, Microcontrollers and Digital ICs Group (MDG) revenues were up 14.6%, led by general purpose microcontrollers which again posted record quarterly sales. Analog and MEMS Group (AMG) and Automotive and Discrete Group (ADG) also grew on a sequential basis, up 4.2% and 2.6%, respectively. Imaging Product Division revenues, reported in others, registered a triple-digit sequential revenue growth reflecting the initial ramp in wireless applications of ST’s new program, including the Company’s Time-of-Flight and new specialized imaging technologies.

Third quarter other income and expenses, net, registered income of $5 million compared to $15 million and $18 million in the prior and year-ago quarter, respectively, mainly due to anticipated lower R&D funding.

Impairment and restructuring charges in the third quarter were $14 million compared to $6 million and $29 million in the prior and year-ago quarter, respectively, mainly related to the set-top box restructuring plan announced in January 2016.

Other income and expenses, net, registered income of $37 million compared to $73 million in the year-ago period mainly due to a lower level of R&D grants.

On a year-to-date basis, impairment and restructuring charges were $25 million compared to $69 million in the year-ago period, mostly related to the set-top box restructuring plan.

Operating income in the first nine months of 2017 improved significantly by $500 million to $585 million compared to the prior year period.

Year-to-date operating income and operating margin before impairment and restructuring charges(1) increased sharply to $610 million or 10.4% of net revenues, compared to $154 million or 3.0% of net revenues, in the first nine months of 2016 mainly due to higher revenues and gross margin, improved product mix, manufacturing efficiencies and better fab loading.

The Company paid cash dividends totaling $59 million and $160 million for the third quarter and first nine months of 2017, respectively.

In August 2017, ST signed a new medium-term credit facility with the European Investment Bank (EIB) for a total of €500 million in relation to ST’s R&D and Capex investments in France, Italy, and Malta for the years 2017 and 2018. The medium-term line is available for drawings in Euro and US$ until Q1 2019 and has terms and conditions substantially in line with previous transactions signed by ST with the EIB.

Mr. Bozotti commented, “We see clear opportunities in front of us to continue to drive revenue growth, margin expansion, and shareholder value and we are determined to capture this additional potential. Our targeted efforts in technology and products, focusing on high-growth markets, are enabling all of our product groups to strengthen their competitive position with major accounts as well as with the distribution channel.

“Looking at the fourth quarter, we continue to see solid demand across product groups and geographies. Based upon strong booking activity and the expected acceleration of growth of our new program serving wireless applications, we anticipate fourth quarter revenues to increase sequentially by about 10.0% at the mid-point and the gross margin to improve to about 39.9% at the mid-point.

“Looking at the year in total, based upon our nine months results and fourth quarter mid-point revenue guidance, we now expect that 2017 net revenues should grow year-over-year by about 18.0% accompanied by a substantial improvement in operating profitability and net income.”

This outlook is based on an assumed effective currency exchange rate of approximately $1.15 = €1.00 for the 2017 fourth quarter and includes the impact of existing hedging contracts. The fourth quarter will close on December 31, 2017.

Some of the statements contained in this release that are not historical facts are statements of future expectations and other forward-looking statements (within the meaning of Section 27A of the Securities Act of 1933 or Section 21E of the Securities Exchange Act of 1934, each as amended) that are based on management’s current views and assumptions, and are conditioned upon and also involve known and unknown risks and uncertainties that could cause actual results, performance, or events to differ materially from those anticipated by such statements, due to, among other factors:

Some of these risk factors are set forth and are discussed in more detail in “Item 3. Key Information — Risk Factors” included in our Annual Report on Form 20-F for the year ended December 31, 2016, as filed with the SEC on March 3, 2017. Should one or more of these risks or uncertainties materialize, or should underlying assumptions prove incorrect, actual results may vary materially from those described in this release as anticipated, believed, or expected. We do not intend, and do not assume any obligation, to update any industry information or forward-looking statements set forth in this release to reflect subsequent events or circumstances.

The important aspect for the IT Industry in digital-era