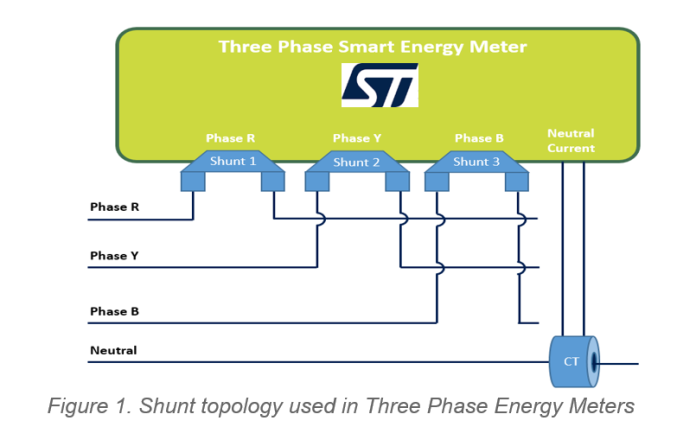 This article elucidates reference designs of the Three-Phase Smart Energy Meter developed by STMicroelectronics and the advantages of shunts over current sensors for poly-phase metrology. 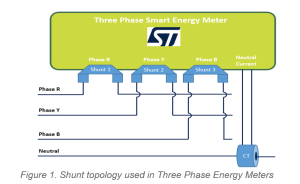 Why current transformers (CT) are used in energy meters?

CTs are used extensively in the metering industry for measuring Alternating Current (AC). It has a ferromagnetic core, a primary and a secondary winding of copper wire.

Figure 2 is showcasing a CT-based traditional Energy Meter. Some advantages that make CT universal in the metering design are:

Therefore, the main reason behind using CT is safety from high voltage hazards.

Due to the above reasons, it is worth considering topologies using shunt for three-phase meters.

Advantages of Shunt over CT

For the designs mentioned below, a five terminal shunt is used to measure the current being drawn. It is a 3W and 0.3 mΩ resistor. A preamplification gain of 16x on the current channel, selectable for both the metrology devices (STPMS2 and STPM32/STPM33) assures a current range up to 100A. The voltage across the shunt resistor, proportional to the input current, is sensed by the ADCs of these devices.

The STPM3x is an Application Specific Standard Product (ASSP) family designed for high accuracy measurement of power and energies in power line systems.

In shunt-based solutions, it is mandatory to isolate the phases from each other’s, because the potential difference on the Printed Circuit Board (PCB), due to the direct contact with the line wire, can be in the range of hundreds of volts. This can produce a discharge current that would destroy the board and the equipment connected to it. Isolation is achieved using the STISO621, a dual-channel digital isolator based on ST’s 6kV thick-oxide galvanic-isolation technology to transfer data between isolated domains in a variety of industrial applications.

As we can see in figure 3, an isolator is used between the microcontroller and STPM32 or STPMS2 metering device.

Consumers who want to control their electricity bills and the industries where precise power, energy, and power factor of heavy machinery must be monitored, this meter (as shown in figure 4) provides a way to sense and control the power and energy consumption. It calculates all the metrology parameters essential for measuring every milliwatt of power consumed by the industry or household. STPM32 metering IC and STM32L486 microcontroller are used for this design.

Figure 5 & Figure 6 are explaining the block diagram of the design.

EVALSTPM-3PHISO (as shown in figure 7) evaluation board implements a complete three-phase energy meter with shunt current sensors. The solution is based on the STPMS2 device, a double channel, 24-bits second-order sigma-delta modulator. Sensing circuitry and PCB layout are optimized to maximize the signal-to-noise ratio for optimal accuracy.

The STPMS2 oversamples the signal using a 4 MHz clock distributed in a synchronized way by the microcontroller and outputs voltage and current sigma-delta bitstreams, multiplexed on the same pin.
The two-wire communication between STPMS2 modulator and MCU is isolated by STISO621W, a 6 kV galvanic isolated interface, allowing up to 100 Mbps rate and low pulse distortion (<3ns) for safe and fast data transfer between isolated domains.
The firmware embedded in the solution exploits the DFSDM filters of the STM32F413RH to convert the six bitstreams into 24-bits voltage and current data, at a 200us rate. It also implements a Virtual COM Port communication to easily access the internal parameters to read metrology data, to modify the internal configuration for high flexibility of the application, and to calibrate the board.

Figure 8 is the block diagram of EVALSTPM-3PHISO. The documentation, tools, and resources for this design are available at https://www.st.com/en/evaluation-tools/evalstpm-3phiso.html

Given the increasing interest in shunt current sensing for the metering industry, ST proposes a reliable and accurate solution for the measurement and control of energy in the domestic and industrial environment, showing how to use the shunt for current sensing. It assures complete immunity to DC and AC magnetic fields and current sensing without any phase shift while lowering the overall system cost. The small form factor ensures a compact circuit board, with very few components to assemble. Of course, it is not only limited to energy metering. Solar inverters, process monitoring, and protective devices can all get benefit from Shunt topology.