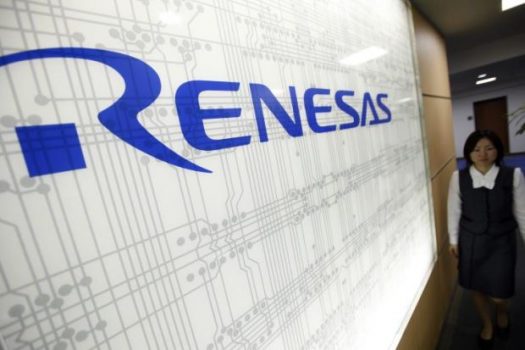 Renesas Electronics Corporation, a premier provider of advanced semiconductor solutions, on November 16, 2016, announced its latest innovative developments in Ethernet time-sensitive networking (TSN). Renesas has become the world’s first to demonstrate standard compliance and interoperability for frame preemption, the most essential feature for TSN at the AVnu Plugfest.
Ethernet TSN standards are currently under development by the TSN task group of IEEE802.1. Their goal is to pave the way for seamless deterministic communication via Ethernet for automotive in-vehicle networking and within the industrial internet.
Recently, the extension of the Ethernet AVB (Audio Video Bridging) standards for professional audio and in-vehicle networks, etc. is progressing. The standards cover several features, including time synchronization as well as traffic scheduling, frame preemption and ingress policing. With these features, the TSN technology is expected to accelerate the harmonization of Ethernet technologies in Industry 4.0 applications as well as in the automotive market, such as for high-speed in-vehicle networks.
Renesas has developed two TSN demonstrations for automotive and industrial networking to illustrate the potential benefits of the TSN standard. The demonstrations will be showcased at the upcoming Automotive Networks to be held on November 17 in Munich, Germany, and SPS IPC Drives exhibitions, to be held from November 22 to November 24 in Nuremberg, Germany.

Renesas offers a variety of semiconductor solutions that support Ethernet AVB, which is already widely used in automotive networks. Building on its expertise in in-vehicle communication technology, Renesas has become the world’s first to demonstrate standard compliance for frame preemption as first in the industry. Renesas will showcase the new TSN demonstration at the upcoming Automotive Networks event in Munich on November 17, 2016. Renesas will also provide more details about the company’s TSN switch solution adapted to the upcoming IEEE 802.1 standards. The TSN technology is expected to realize wider use of Ethernet for in-vehicle networks and even replace the previous networks used for critical control. Renesas is also eyeing the possible replacement of the existing Ethernet with the TSN for automotive control systems, and intends to promote TSN standard in automotive networks to contribute to the realization of more suitable and safer autonomous-driving vehicles.

With its rich lineup of industrial network solutions that support a variety of industrial Ethernet standards, Renesas is contributing towards the realization of Industry 4.0. The latest generation of industrial Ethernet standards often come with proprietary layer-2 implementations, which make network convergence difficult. The consequences are isolated networks that require gateways to be connected to other hierarchies. Renesas is working to combine the current generation of industrial network technology with TSN to make it future-proof while also supporting legacy standards by offering best-in-class solutions.
Renesas will showcase the TSN demonstration on stand 142, Hall 6 at the upcoming SPS IPC Drives fair 2016 in Nuremberg.

The TSN demonstration for automotive application is based on a future in vehicles network domain architecture. It shows tunneling of CAN traffic via Ethernet and the effects of various TSN features that can be enabled or disabled on demand.
The TSN demonstration for industrial applications is designed with the factory network in mind where various devices are connected. This demonstration showcases the effects of TSN features on motor control for which real time control is essential, on a network where traffic from various devices coexists.

Main features of TSN standard shown in the demonstration

Along with many standard switch features, the TSN demonstrations will specifically include the following features:

Renesas intends to continue to support promotion of the Ethernet TSN standard and its adoption in the automotive and industrial fields to contribute to the development of autonomous-driving vehicles and Industry 4.0.
Share
Facebook
Twitter
Pinterest
WhatsApp
Previous article30A, Scalable to 180A, µModule Regulator in 9mm x 15mm BGA Package
Next articleTargus Introduces Two USB-C Hubs