MENUMENU
Home Industry News Pre-Budget Expectations: On the rise, for the rise 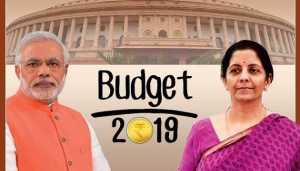 The Union Budget 2019-20 is not even a week away. Modi 2.0 is all set to present its full-year budget for FY20. This year’s budget would be presented by the newly appointed, country’s first full-time women finance minister Nirmala Sitharaman on July 5.

What do the Associations expect from Modi 2.0?

Unfortunately, India’s Union Budget for the fiscal year 2018-19 failed to address the new world order. India’s electronics industry expected a lot of things from the Union Budget. But, in return, they received no hope from the government. This time, again at the Budget edge, Associations are looking a new way out and are expecting their opinions and ideas to be fulfilled by Modi Government. Let’s have a look at what the Associations say:

The not for profit apex national body – Society of Indian Automobile Manufacturers (SIAM) has shared the proposal to the Government, for GST reduction on vehicles.

Commenting on the same, Rajan Wadhera, President, SIAM, said, “The automotive industry is currently facing a daunting challenge of a deep slowdown that urgently needs some form of stimulus from Government to supplement the efforts being made by the industry in reversing the industry fortunes towards positive performance. Even in the past the Government has offered stimulus to propel growth and it has reversed the growth in the positive direction. In addition to the reduced demand today, new safety and emission norms that would come into play in the next few months would further drive up the cost of vehicles, leading to further pressure on demand. A reduction in the GST rates would go a long way in maintaining the price competitiveness of the industry and boosting the consumer demand.”

“Industry is looking up to Government to provide urgent support to overcome this trying period and is equivocal in seeking this support from Government in the forthcoming Union Budget,” added Wadhera.

–  GST rate on all categories of vehicles should be brought down to 18% from current 28%.

–  A fleet modernization programme should be introduced to get the polluting, unsafe and old vehicles off the road.

– Corporate tax rate for all companies should be brought down to 25%, as was indicated by the Finance Minister in his speech.

– Weighted deduction for R&D activities should be reinstated at 200% till such time the corporate tax rates are reduced to 25%.

ELCINA, the Electronic Industries Association of India, expects from the Government to allocate suitable budgetary provisions for electronics sector to incentivize Value Addition.

Dr. Ashish Saurikhia, Coordinator (Policy and Research), ELCINA said, “The Electronics sector has been in focus for the last decade and is widely recognized as one of the driving forces for a vibrant and modern society. ESDM (Electronic Systems Design and Manufacturing) is commonly referred to as a ‘meta resource’ which cuts across sectors and drives efficiency, affordability, sustainability, delivery of services and inclusive growth. While new and creative policies have been formulated to promote electronics manufacturing since the 1960’s, it is only around 2009-10 that a focused and comprehensive effort was undertaken to address the challenges faced by this sector. ESDM sector has continued sluggish progress vis-à-vis the growth in domestic demand and global expansion of electronics manufacturing and advances in technology resulting in an uncompetitive industry plagued with disabilities and a market dominated by imported goods.”

“Make in India can be a reality only if the investor is reasonably assured of profitability and MSME’s are given due support to flourish. At present this is not the case and it is much safer and easier to import or follow the SKD or at best CKD assembly model. Government in this budget should come up with policies to incentivize Value Addition in the sector. ELCINA recommends that a suitable budgetary provisions should be allocated for electronics sector especially for components and assemblies,” added Dr. Saurikhia.

Talking upon the MSME’s benefits, Dr. Saurikhia said, “It is recommended that VAMS should be announced in line with MSIPS for high value addition segments such as Components, PCBs & ATMP by providing direct investment subsidy. This is recommended through Interest Subsidy on Term Loans and Working Capital Credit, Direct Tax benefits through lower corporate tax rate and subsidies for Employment generation and Skill Development. MSME’s must have a specific mention in this Budget as they are not getting benefits under current MSME Act definition which defines a very low Investment Limit of only upto Rs 10 Cr for Medium Scale enterprises.”

– Promotion of PCB manufacturing in the country.

In order to impact the policy and legislative environment and foster balanced economic, industrial and social development. ASSOCHAM, the representative organ has proposed the Pre-budget memorandum to the Government, which states that tax exemption limit should be increased

The basic exemption limit for an individual income tax payee should be raised to Rs 5 lakh from Rs 2.50 lakh at present, in the backdrop of the inflationary impact over the years, the ASSOCHAM has proposed in its pre-Budget memorandum to the Government.

“Considering the inflation over the years, tax exemption limit should be increased from Rs. 250,000 to Rs. 500,000,” the chamber’s memorandum to the Finance Ministry stated.

The chamber also suggested that “to bring in the necessary parity amongst salaried and non-salaried tax payers, it is desirable that standard deduction be reinstated in the statute. Approximately 20% of the gross salary subject to a maximum limit of, say, Rs.1,00,000 could be considered for the purpose of standard deduction.”

The pre-Budget memorandum also said “tax exemption for LTC or allowance is currently restricted to the value incurred for travel and it does not include expenses on accommodation or meals. ”In case of travel, significant costs would be incurred on accommodation and food and hence, the exemption should cover these as well.”

The Telecom Equipment Manufacturers Association of India, in its new pre-budget proposal, expects for high import duties on telecom and electronics equipment.

– Higher import duties on import of telecom and electronics equipment, which is at the rate of 10% at present, we have asked Government to increase it to 100%, to incentivise Make in India.

– For a policy from the Government for 5G and 6G, Government should allow only Make in India Products.”

The apex association of manufacturers of electrical, industrial electronics and allied equipment in India, IEEMA expects from the Ministry to announce a series of measures to further accelerate the growth of electrical equipment industry and the power sector as a whole. The industry is facing slowdown in few product segments, due to lack of demand and increasing imports that has touched approx. USD 10.24 billion in 2018-19.

Harish Agarwal, President, IEEMA said, “It is high time for the Government to increase
the competiveness of the domestic electrical equipment industry by reducing the cost of
manufacturing through favourable tax structure; quality infrastructure; availability and
controlling the landed cost of necessary imported raw materials &amp; components. High cost of finance is another area of concern, especially for the SME segment, with limited funding options, given its appetite for working capital.”

He further recommended, “There should be zero Basic Customs Duty on imports of CRGO
Steel and Amorphous Alloy Ribbon, till the time these are produced indigenously. Since
neither of these materials are manufactured in India now there is no one to be protected in
the form of Basic customs Duty”.

Sunil Misra, Director General, IEEMA opined, “We also recommend for abolition of MAT
and reduction in corporate and personal income tax as these steps would help in increasing
consumption and in turn promote economic growth. Quick refund mechanism for all
embedded taxes and duties in entire value chain under GST is another key to promote
sustainable growth of the industry. Finished electrical equipment (largely under Chapter 84
and 85) attract basic customs duty, ranging from 7.5% to 10%, while the same product are
also imported at a concessional basic customs duty of 5%, under the Project Imports, bringing in disadvantage and lack of level playing field for the domestic industry. Domestic
industry needs to be given equivalent benefits to compete this concessions.”