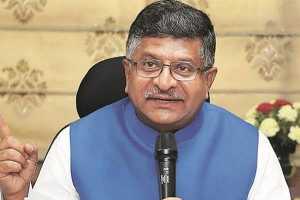 An official release said that around 50 industry leaders have confirmed their participation for the round table. Representation has been confirmed from all the major verticals of the electronics sector including mobile handsets, consumer electronics, strategic electronics, medical devices, Information Technology, electronic manufacturing services, electronic components, telecom and LED lighting.

Communications and Electronics and Information Technology Minister Ravi Shankar Prasad will explain his vision for the sector and communicate with the CEOs. The release said that the government is giving high priority to domestic electronics hardware manufacturing and it is one of the important pillars of both ‘Make in India’ and ‘Digital India’ programmes of the government. The plans and activities for promotion of electronics hardware manufacturing have led to import substitution.

Over US Dollar 15 billion worth of investment proposals has been received by the Ministry of Electronics and IT (MeitY) under its flagship investment scheme, the release stated.

The release said that the number of manufacturing units for LCD/ LED TVs has gone up from 25 to 35, LED lights manufacturing units from 10 to 128 units, the sector has generated employment for over 20 lakh persons across the country and exports of electronics goods have also started growing rapidly.

It said that the sector has significant scope for the growth with the domestic market estimated at USD 400 billion by 2025 and India has potential to be the “Electronics Factory” of the world.

The National Policy on Electronics 2019 envisions positioning India as a global electronics hub by encouraging and driving capabilities for developing core components (including chipsets) and creating an enabling environment for the industry to compete globally.