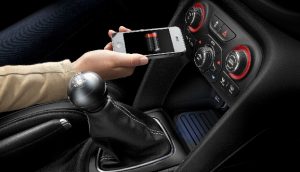 Near Field communication (NFC), a bidirectional short range communication technology, allows an interaction distance of few centimeter and a maximum data rate of 424 kb/s. It is designed for the safe and simple data exchange between two devices. A subset of RFID, NFC appears poised to expand beyond cell phones to automotive applications. It can be seen as an enabler for many new in-car functions for the customers and also can simplify the utilization of already existing in-car functions.

Bluetooth pairing requires multiple user interactions to establish the first connection between the user and the car. NFC substitutes these multiple interaction by just one “tap & pair” interaction. Just tap the NFC-enabled phone to the NFC device located on the dashboard and confirm the pairing. The car activates its Bluetooth interface and the internal Bluetooth address, the PIN, the name of the device etc. are transmitted by the car to the NFC phone. The mobile phone then establish a secure link to the car using the Bluetooth interface and completes the pairing process. Typically this intuitive pairing process Only takes 1-2 seconds to be fully executed.

NFC can be utilized by the passengers to personalize their environment like setting of the air condition, infotainment settings (sound and display settings), lights, last destinations etc.  This personalization is not restricted to the driver but can also be used by the other passengers using the car. These information are stored on a NFC tag and just by simply wiping the personalization tag over the dashboard where the NFC reader is located, the desired settings can be activated. The other use cases could be user authentication, e-payment and activation services like the activation of additional navigation maps.

The low power requirements of NFC also make the technology useful for key fobs. NFC devices can unlock doors and store user profiles for settings such as seat positions and radio stations.By using your NFC smart phone or a NFC tag you can lock or unlock your vehicle. It also facilitates data sharing with cell phones.NFC is also ideal where flexible access solutions are required such as car sharing, car rental, social sharing, fleet management etc.

The NFC interface is portable and can also be used outside the car. When a user turns off the car, the car transmits status information to the smart phone and the user can use this information like the status of the locks, the position of the car, the tank level etc. All these use cases show the huge potential of NFC within the car. Some use cases need NFC-based devices (e.g. mobile phones, PDA, etc.)and some use cases rely on a public NFC/RFID infrastructure(e.g. for public transport, payment, ticketing, etc.). Thus the future use of NFC within the car directly depends on the future market penetration of NFC devices and the infrastructure which could vary much in the different regions of the world.

One of the pioneers of NFC and RFID technology, STMicroelectronics offers a comprehensive range, covering all NFC application needs, supported by a rich ecosystem. The devices include NFC / RFID tags, Dynamic NFC tags, and NFC / RFID readers.