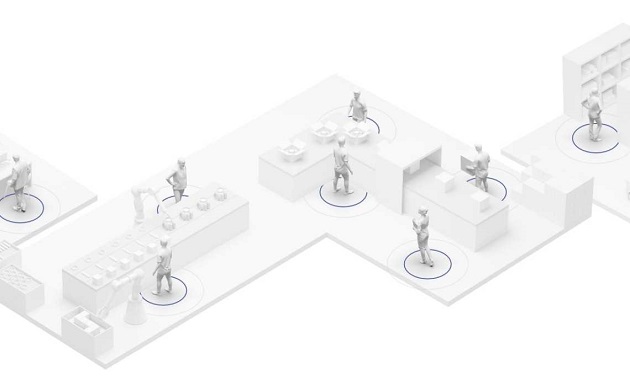 ST has released a new SDK that gauges the physical distance between two Bluetooth low energy modules, and is announcing its first use in the fight against pandemics. Indeed, the inaugural product is the Nextent Tag by Inocess, a wearable that vibrates if it detects that another tag is only two meters away or less, which would mean that two persons are closer than the guideline established to protect against the spread of viruses. Inocess, a French company and member of the ST Partner Program, is targeting corporations looking to create a smart badge or live events where organizers wish to track attendees. It is not a consumer product tracking private movements. The tags are designs that corporations or institutions can customize to use within a workplace or public arenas, for instance.

As countries start to relax restrictions, it is clear that physical distancing worked. In conjunction with proper hand hygiene, stay-at-home orders, and cough etiquette, staying six feet away from each other (or two meters) contributed to “flattening the curve,” meaning that it lowered the infection rate. Two studies, one from the University of Minnesota, Minneapolis, and another from the University of Toronto, both showed drastic reductions in infections and deaths thanks in large part to physical distancing. Epidemiologists are, therefore, already talking about dynamic physical distancing, meaning that governments may periodically institute physical distancing measures to prevent an overwhelming run on health care establishments, and the practice may become part of our new normal for the next few years. Hence, a product like the Nextent Tag may be invaluable.

Our teams in Noida, India, were trying to find a way to determine the physical distance between two Bluetooth modules and decided to rely on an interesting relation between the transmit power and the Received Signal Strength Indicator or RSSI of Bluetooth low energy modules. Since the device sending a beacon advertises its transmit power (Tx), the receiving component can use that data in relation to its RSSI to determine the distance between both of them such as:

In the formula above, N is a constant that represents the environmental elements that may affect the signal. It traditionally ranges between 2 and 4 with a perfect environment having a value of

Although the equation is common knowledge, the innovation comes from the way our teams in Noida used it in their algorithm to ensure greater accuracy and efficiency. Indeed, since the transmit power can vary significantly from one measurement to the next, the SDK stores between 20 and 100 samples in RAM and averages their values while also applying complementary RSSI filters to increase accuracy. Additionally, the SDK can use an accelerometer to only wake a system in motion or after a longer period, thus saving more battery life by staying in sleep mode longer.

According to our calculations, a device using a 250 mAh battery would have a maximum battery life of six days in a constant active phase and under optimal conditions. However, since our estimate is purely theoretical, it was thrilling to see Inocess implement our physical distance SDK in their Nextent Tag.

The French company first started working on its version of a physical distancing algorithm. However, as Sebastien Icart, co-founder and CEO of Inocess, and Robin Bonamy, its CTO, explained:

“Receiving the ST physical distance SDK was like a breath of fresh air. Trying to develop something like this from scratch is extremely time-consuming. Hence, to have such a solution allowed us to save time and focus on the implementation rather than purely theoretical considerations.”

Inocess, therefore, took our new SDK and optimized its implementation to fit a real-world application. For instance, the algorithm must provide accurate results regardless of the antenna’s position or typical environmental factors, such as the presence of the Nextent Tag inside a pocket or a purse. Moreover, Sebastien and Robin’s teams must create a highly efficient application to last long enough on a battery that’s much smaller than our test setup, which meant adjusting the number of samples in memory. And although Inocess explains that it’s impossible to have exact battery life numbers because they would vary a lot from one use case to the next, the French company is anticipating a full day of use on average or about 10 hours. Hence, Inocess’s ingenuity was to take something from our labs and integrate it into a design that companies can use in real-world applications with minimal changes.

Nextent Tag: The Antenna Placement Is One of Many Design Challenges

The innovations behind the Nextent Tag extend far beyond the SDK implementation to reach to the hardware itself. For instance, Sebastien’s and Robin’s teams had to place the antenna in a way that would optimize its performance, especially since the physical distance SDK so heavily relies on an accurate reading of the signal strength. As a result, they had to come up with a design that would place the antenna between the PCB and ground layers while ensuring that the metallic parts of the enclosure did not interfere with the signal while also guaranteeing accurate measurements regardless of the product’s orientation. Many may underestimate the tuning and optimizations that went into such an implementation, especially since Bluetooth is so ubiquitous. However, this isn’t your typical smartphone wireless module as the tiny form factor and massive battery constraints represent complex challenges to overcome.

Inocess only started developments less than three months ago. Embedded system traditionally take a lot longer, but faced with the current pandemic, the French company wanted to start shipping samples immediately. As a result, they began on a SensorTile, a kit we highly recommend when learning Embedded Systems. Sebastien and Robin explained that the SensorTile kit allowed them to work on their firmware before even receiving their first custom PCB.

Once they had a proof-of-concept, they moved to the BlueNRG-Tile (STEVAL-BCN002V1B), which uses a BlueNRG-2 SoC that makes Bluetooth 5 more efficient and also embarks a myriad of sensors on a coin-like PCB measuring just 2.5 cm in diameter. Since the wireless device uses a Cortex-M0 and not an STM32, Inocess had to move away from STM32CubeMX, which they had used when working on the SensorTile. They relied instead on our BlueNRG SDK (STSW-BLUETILE-DK) to setup the Bluetooth radio and sensors peripherals. However, as Sebastien and Robin told us, they were able to move fairly rapidly thanks to the many application examples that come with ST’s software. Moreover, Inocess’s application was able to fit on the BlueNRG-2 SoC, meaning that they did not require an external MCU, which vastly improved the overall efficiency.

Now that Inocess is about to ship samples, they are moving to an entirely custom design that will use an ST fuel gauge and battery management system, a BlueNRG-M2SA wireless processor certified module, and the LSM6DSO as an accelerometer, among other ST devices. As the CEO and CTO recounted, they are planning to use the MEMS’s finite state machines in a later firmware version to optimize the power consumption significantly while improving the functionality by offering double-tap recognition.

Inocess is now getting ready for customization and mass production. Indeed, although companies may take the Nextent Tag design and adapt it to their needs, the French team also provides hardware and software services. They even offer a secure and customizable dashboard to enable clients to visualize and manage data, and the Nextent Tag is part of a bigger platform, the Nextent Tech, that has applications beyond distance detection.