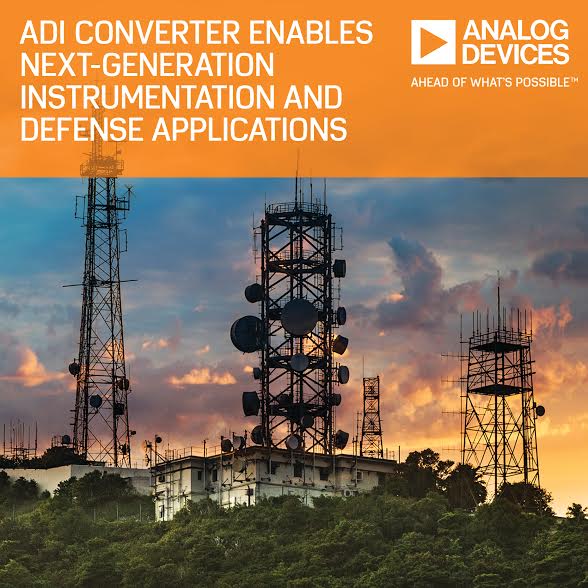 Analog Devices, Inc. on October 13, 2017, announced a 14-bit, 2.6 GSPS dual A/D converter which enables IF/RF sampling with superior speed and linearity. The AD9689 A/D converter features power dissipation of 1.55W per channel, half the dissipation of comparable solutions in the market, thus further increasing suitability for many of its targeted design situations.

In addition to the high-performance AD9689, ADI introduced two related converters: the AD9695, a dual 14-bit 1300/625 MSPS device, and the AD9697, a single 14-bit, 1300-MSPS unit. Both are lower-power, pin-compatible upgrades for existing devices. All three A/D converters include JESD204B interfaces for efficient and highest-speed interconnection to FPGAs, and share the same register map, so they can be used across multiple platforms with minimal coding efforts. Since many system architectures require complementary signal-transmission channels, Analog Devices also offers the AD9172 and AD9162 D/A converters as counterparts to the AD9689 and AD9695.

Full-speed spur free dynamic range (SFDR) of the AD9689 is an exceptional 64 dB full scale for a 3-GHz analog input. Other features of this converter include user-programmable FIR filters which allow users to perform quadratic error correction and equalization for optimized performance, and an analog input bandwidth of 9 GHz in the BGA-packaged version to allow for RF sampling up to and beyond the 4th Nyquist zone. The AD9689 A/D converter’s JESD204B interface supports 16 GBPS/lane performance, which exceeds the 12.5 GBPS/lane requirement of the standard. Thus, the system FPGA can use fewer lanes, while freeing resources for other functions.