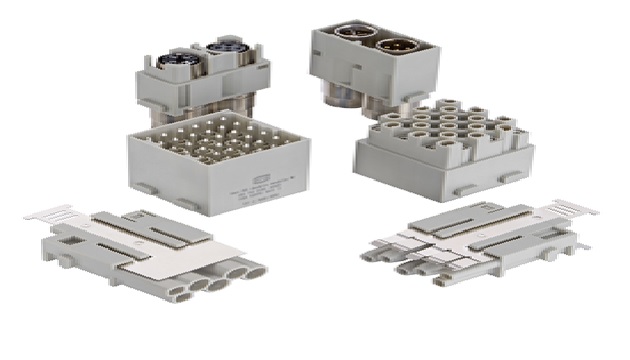 With the new Han Shielded Power Module, users can for the first time make the connection of shielded power cables both modular and mateable. Also new to the Han-Modular portfolio is an M12 solution for mechanical engineering and transportation applications, as well as the Han DD double module. From the latter, space-saving interfaces can be created e.g. in robotics and automation that enable shorter assembly times.

The Han Shielded Power Module has three power contacts and one PE contact for connecting typical three-phase loads, two signal contacts for temperature monitoring, brakes, etc., as well as a large-area shielding to which the cable screening can be connected for better electromagnetic compatibility. The module represents an alternative to hardwired shielded power lines, while allowing such connections to be made side-by-side with other modules of the Han-Modular series, in one hood or housing.

HARTING has tested the new module in practical applications in the EMC laboratory. The EMC characteristics of the shielding are suitable for typical drive applications such as frequency-controlled drives. The advantage of the module is that shielded power cables can now be connectorised. It is easy to handle as the shielding can be terminated directly to the module. This results in shorter assembly times for machinery and equipment, in the factory or at the end customer.

In the area of mechanical engineering, the M12 format enjoys high acceptance as a robust data interface. Now, HARTING has integrated this mating face within a single module – as a Han M12 module with two M12 interfaces for signals, industrial buses or Ethernet transmission. It is available as different types, e.g. D- or X-coded version. As a result, the packing density compared to existing modules is doubled. This also saves on space for one module in the hinged frame – space that can be used for other functions.

With the Han DD double module, HARTING has created a solution for 36 Han D contacts that combine high contact density with a rated voltage of 400 V. Existing solutions accommodate only 24 contacts for 250 V in the same space. Thus, the number of contacts is increased by 50%.

Due to the electrical properties (10 A / 400 V), the double module is particularly suitable for transmitting power and signals in machines and robots. For the first time ever, it is now possible to use a single module to implement plug-in connections for three-phase AC motors, including return path for all six axes of a robot.