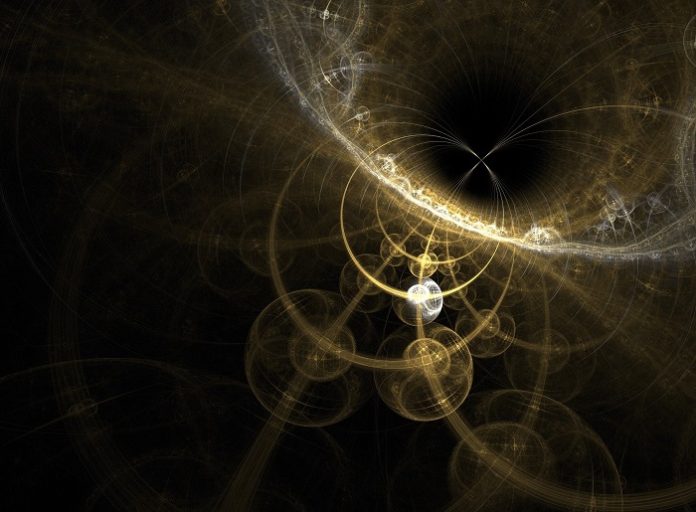 Light offers an irreplaceable way to interact with our universe. It can travel across galactic distances and collide with our atmosphere, creating a shower of particles that tell a story of past astronomical events. Here on earth, controlling light lets us send data from one side of the planet to the other. Given its broad utility, it’s no surprise that light plays a critical role in enabling 21st-century quantum information applications. For example, scientists use laser light to precisely control atoms, turning them into ultra-sensitive measures of time, acceleration, and even gravity. Currently, such early quantum technology is limited by size—state-of-the-art systems would not fit on a dining room table, let alone a chip. For practical use, scientists and engineers need to miniaturize quantum devices, which requires re-thinking certain components for harnessing light.

Now IQUIST member Gaurav Bahl and his research group have designed a simple, compact photonic circuit that uses sound waves to rein in light. The new study, published on October 21, demonstrates a powerful way to isolate or control the directionality of light. The team’s measurements show that their approach to isolation currently outperforms all previous on-chip alternatives and is optimized for compatibility with atom-based sensors.

“Atoms are the perfect references anywhere in nature and provide a basis for many quantum applications,” said Bahl, a professor in Mechanical Science and Engineering (MechSe) at the University of Illinois at Urbana-Champaign. “The lasers that we use to control atoms need isolators that block undesirable reflections. But so far the isolators that work well in large-scale experiments have proved tough to miniaturize.”

Even in the best of circumstances, light is difficult to control—it will reflect, absorb, and refract when encountering a surface. A mirror sends light back where it came from, a shard of glass bends light while letting it through, and dark rocks absorb light and convert it to heat. Essentially, the light will gladly scatter every which way off anything in its path. This unwieldy behavior is why even a smidgen of light is beneficial for seeing in the dark.

Controlling light within large quantum devices is normally an arduous task that involves a vast sea of mirrors, lenses, fibers, and more. Miniaturization requires a different approach to many of these components. In the last several years, scientists and engineers have made significant advances in designing various light-controlling elements on microchips. They can fabricate waveguides, which are channels for transporting light, and can even change their color using certain materials. But forcing light, which is made from tiny blips called photons, to move in one direction while suppressing undesirable backward reflections is tricky.

“An isolator is a device that allows light to pass uninterrupted one way and blocks it completely in the opposite direction,” said the study’s first author Benjamin Sohn, a former graduate student and postdoctoral researcher in Mechse who is now at NIST, Boulder. “This unidirectionality cannot be achieved using just any common dielectric materials or glasses, and so we need to be a little more innovative. We also want the isolator to operate at wavelengths of light tuned to atomic sensors, which can be hard even at large scales.”

In typical experiments, the best tool for achieving unidirectionality uses magnets. For example, nearly every laser has a magneto-optic isolator that lets light exit the laser but prevents it from traveling backward, which would mess with laser functionality. While even lasers can be miniaturized, shrinking conventional isolators is problematic for two reasons. First, in compact devices, magnetic fields would negatively affect nearby atoms. Second, even if there was a way to get around this, the materials that are inside the isolator do not work as well on the smaller length scales on a chip.

Bahl’s team demonstrated a new non-magnetic isolator that turns out to be simple in design, uses common optical materials, and is easily adaptable for different wavelengths of light.

“We wanted to design a device that naturally avoids loss, and the best way to do that is to have light propagate through nothing. The simplest bit of ‘nothing’ that can still guide photons along a controlled path is a waveguide, which is a very basic component in photonic circuits,” said Bahl.

In a complete atom-based system, the waveguide would steer laser light through a series of elements to a small chamber containing atoms. With this in mind, the team has optimized their chip for use with 780 nanometer light, which is the wavelength needed to configure common rubidium-based sensors.

That is only the first half of the design because for isolation, the light must be simultaneously blocked in the opposite direction. Previously, the team showed that they could launch sound waves into a photonic circuit to break the symmetric flow of light. In the new study, the team turned this idea into a demonstration of a functional chip element.

The team’s measurements revealed that nearly every photon moves through the waveguide in the forward direction, while having only one-in-ten-thousand chance of making it through backward. This means that the design reduced losses, or undesirable light absorption, to nearly zero, which has been a long-standing problem with previous on-chip isolators. The data show that the new devices exhibit record-breaking performance for on-chip isolation and operate as well as the larger magnet-based devices. In addition, the approach is flexible and can be used for multiple wavelengths without changing the starting material.

“The simplicity in fabrication is key—with our approach, you could print photonic isolators that work well for whatever wavelength you need, all on the same chip at the same time. This is just not possible with other approaches today,” said co-author Ogulcan Orsel, a graduate student in Electrical Engineering at the U of I.

This could make the new design useful for other applications, like quantum computing, where stray, uncontrolled magnetic fields, as well as unwanted light, can erode overall device performance.