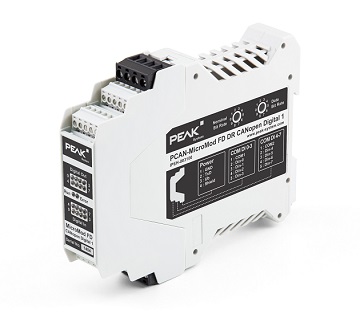 For years, many MCUs have been equipped with the Controller Area Network (CAN) interfaces including CAN FD. These interfaces are optimized for embedded communication and make it easy to transmit and receive single messages.

“To take full advantage of the capabilities of such interfaces, middleware communication protocols are required,” says Olaf Pfeiffer, General Manager of EmSA. “One of the most popular protocols for embedded CAN applications is CANopen, for which EmSA has delivered its Micro CANopen software for more than 20 years, and remains highly used among embedded developers.”

Free-to-use versions of EmSA’s Micro CANopen library are now fully integrated into the MCUXpresso SDK for a selection of NXP LPC MCUs and i.MX RT crossover MCUs.
“This integration further simplifies the process of prototyping and integrating sophisticated and reliable communication into embedded systems.” said Brendon Slade, director of MCU ecosystem for Edge Processing at NXP Semiconductors. “For most systems, the libraries can be used in production without further licensing.”

One of the first adopters is PEAK-System Technik: Their industrial I/O module PCAN-MicroMod FD is based on NXP’s LPC54000 MCU series and uses a variation of EmSA’s Micro CANopen libraries. “Using a proven CANopen (FD) protocol implementation for our I/O devices greatly reduced our development time and opens up additional use-cases for our customers.”, says Uwe Wilhelm, General Manager of PEAK-System Technik.