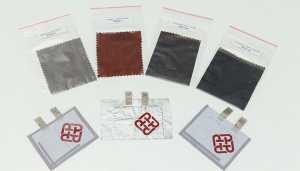 With high energy density, high flexibility, and high reliability, the new Textile Lithium Battery could be used in applications ranging from smartphones and global positioning system (GPS) tracking to health-care monitoring and intelligent textiles as well as a variety of internet of things (IoT) projects.

Demonstrated specs of the new battery, which is less than 0.5 mm thick, include a high energy density of more than 450 Wh/L, high flexibility with a bending radius of less than 1 mm, and a foldability rating of more than 1,000 cycles with marginal capacity degradation. The technology also delivers a fast charging/discharging capability.

Researchers said that existing bendable lithium batteries can offer a bending radius of only about 25 mm and a much lower energy density of less than 200 Wh/L.

By using PolyU’s patented technology of Polymer-Assisted Metal Deposition (PAMD), highly conductive metal, copper, and nickel are uniformly and conformally deposited onto pre-treated fabrics. These fabricated metallic fabrics, featuring low sheet resistance and large surface area, serve as current collectors in the battery, said researchers. Active materials are added to act as cathode and anode, after which the metallic fabrics, together with separator and electrolyte, are assembled into the Textile Lithium Battery.

Lab tests indicate that the battery exhibits high mechanical stability, durability, and safety under deformation. Findings show that when the battery is repeatedly folded in half, twisted at different angles, or crumpled, its voltage window remains unchanged and it can be bent over 1,000 times with marginal capacity degradation. Safety tests — conducted by continuous hammering, trimming with scissors, and penetrating with nails — demonstrated that the battery can provide stable power output for the electronic components without catching fire or bursting.